For the past nine years, the annual UNCF Los Angeles Mayor’s Masked Ball has brought together more than 500 local leaders, educators, students and advocates to celebrate those who have committed to making an impact on HBCUs, scholarship and minority education. Out of consideration for the health, safety and well-being of our attendees and participants and the rising concerns about the spread of COVID-19 (Coronavirus), we have decided to postpone this year’s event.

We thank our host, partners, sponsors, guests, and honoree for their understanding and we look forward to sharing the new date soon.

In the meantime, for guest and sponsor questions, please email jennifer.childress@uncf.org.

Joined by Mayor Eric Garcetti, leading companies such as Delta Air Lines, and celebrities and friends, UNCF will bring together more than 500 local leaders, educators, and advocates to honor those whose commitments to making an impact inspire us all. This year, we will honor the incomparable Anthony Anderson, meet the scholars whose lives have been changed, and celebrate the cause of education.

Ticket, table, and sponsorship details below. 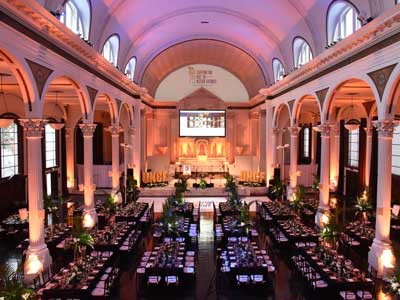 Vibiana is located in the Historic Core of Downtown Los Angeles.  Vibiana is a former cathedral, church building and parish of the Roman Catholic Archdiocese of Los Angeles. The cathedral structure is one of the last remaining buildings from the early period of Los Angeles history. The building opened in 1876 as the cathedral for what was then known as the Diocese of Monterey-Los Angeles and remained the official cathedral of the Los Angeles archdiocese for over 100 years. The cathedral was named after Roman martyr Saint Vibiana. The structure was listed on the country’s “11 Most Endangered Places” by the National Trust for Historic Preservation.

During the 1994 Northridge earthquake, the building sustained damage that was too expensive for the Archdiocese to repair. In 1996, the City of Los Angeles and the Archdiocese reached an agreement in which the archdiocese would purchase a nearby site on which to build a new cathedral, and in turn would transfer over the St. Vibiana site to the City of Los Angeles. In the late 2000s, the former cathedral building became the event venue we now call Vibiana.