NEW YORK—During the past 75 years, UNCF (United Negro College Fund) has helped nearly half a million students earn college degrees. As it marks such a major milestone, UNCF celebrated its impact at its 8th annual Hamptons UNCF Summer Benefit on Aug. 3 at the residence of Nancy Silberkleit, co-CEO of Riverdale/Archie Comics, in East Hampton, NY. “We are thankful for partners such as Nancy Silberkleit, for hosting the event in her home for the 5th consecutive year,” said Diego Aviles, Vice President, UNCF Northern region. The event reached new fundraising heights, raising more than $350,000 for historically black colleges and universities (HBCUs) and their students.

“Without this scholarship, I honestly do not know if I would be able to stand in front of you all as a graduate of the number one HBCU in the world.”

“There are millions of Americans who, over 75 years, have invested in UNCF and better futures for our students, and through that success, for all of us,” said Lomax. “Today, we raise the resources our HBCUs need to do their invaluable work. Today, we fund scholarships that narrow the gap between college costs and family resources. And together, we change the narrative of our HBCUs, who help strengthen and elevate a new generation of young, black and gifted students.” 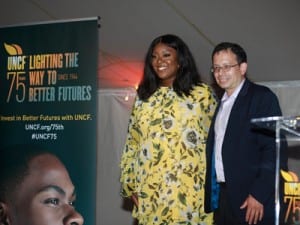 UNCF paid tribute to two champions of diversity and education with its “Keepers of the Flame” award: R. Donahue Peebles, founder and CEO, The Peebles Corporation, who is a leader in helping to advance educational opportunities for young people of color through his philanthropy; and HBCU Spelman College alumna Sharlee Jeter, president of the Turn 2 Foundation, who recently commemorated UNCF’s 75th anniversary with a $100,000 donation and has been a long-standing partner through the UNCF/Sharlee Jeter scholarship. Sharlee’s father, Dr. S. Charles Jeter, a 1971 graduate of HBCU Fisk University, attended and presented his daughter with the prestigious award.

“Empowering young people to work hard, excel in their academics and pursue a higher education is a critical component of our Foundation’s mission,” said Sharlee Jeter. “The UNCF/Sharlee Jeter Scholarship has enabled us to support so many students by ensuring they have access to a college education, and we’re proud to build upon a legacy that provides young people with the tools and resources to achieve their greatest potential.” 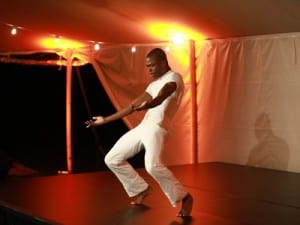 “Without this scholarship, I honestly do not know if I would be able to stand in front of you all as a graduate of the number one HBCU in the world,” said Gordon. “The work UNCF does to not only help support HBCUs but allowing students to afford an HBCU education is crucial and most importantly—necessary—considering the state of the world we live in today. I want others to be afforded the same opportunity I was given as I walk beyond the beloved gates of Spelman College with opportunities made possible by UNCF.”

Since its founding, UNCF has raised more than $4.8 billion and has helped nearly half a million students earn degrees at UNCF-member HBCUs. “There’s another message in UNCF’s 75th anniversary celebration,” Lomax added. “In a country whose population is rapidly trending majority-minority, and at a time when a college education is more important—and more expensive—than ever, UNCF’s biggest challenges are ahead.”  UNCF annually awards more than 10,000 scholarships, Lomax noted, but for every scholarship it awards, it must turn away nine potential leaders for lack of funding. “We owe—and our country owes—those nine the support they need to go to and through college,” Lomax said. “As we celebrate our 75th anniversary, we commit to fulfilling that obligation.”

UNCF (United Negro College Fund) is the nation’s largest and most effective minority education organization. To serve youth, the community and the nation, UNCF supports students’ education and development through scholarships and other programs, strengthens its 37 member colleges and universities, and advocates for the importance of minority education and college readiness. UNCF institutions and other historically black colleges and universities are highly effective, awarding nearly 20 percent of African American baccalaureate degrees. UNCF awards more than $100 million in scholarships annually and administers more than 400 programs, including scholarship, internship and fellowship, mentoring, summer enrichment, and curriculum and faculty development programs. Today, UNCF supports more than 60,000 students at more than 1,100 colleges and universities across the country. Its logo features the UNCF torch of leadership in education and its widely recognized motto, “A mind is a terrible thing to waste.”® Learn more at UNCF.org, or for continuous updates and news, follow UNCF on Twitter at @UNCF.