“I am humbled from the overwhelming number of UNCF supporters who attended the inaugural Virginia Governor’s Luncheon in support of Virginia HBCUs and their students and working to earn a college degree,” said Robin Byrd, area development director, UNCF. “Many guests praised UNCF’s mission and stressed the importance of continuing to support our organization because there is yet much more work to be done.” 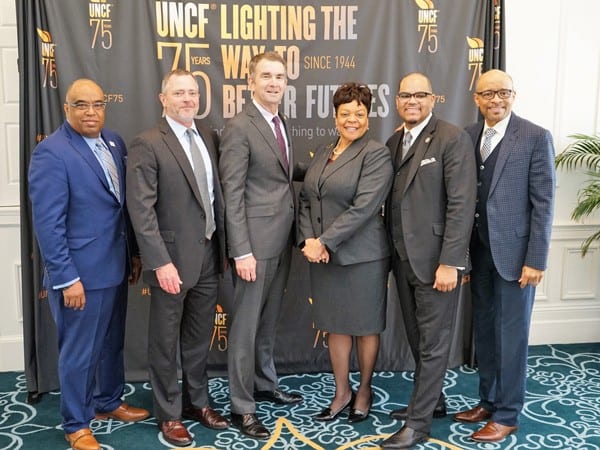 For being beacons of hope and advocates of a quality education for all, UNCF awarded the 2019 Virginia UNCF Flame Bearer of Education awards to Dr. Billy K. Cannaday, former Virginia State Superintendent of Instruction; corporate recipient, Dominion Energy, accepted by Frank Hinckle, a longtime member of the UNCF Richmond Leadership Council; and annual faith contributor, the Second Baptist Church of Chester because of its 10 percent ministry church campaign, accepted by the Rev. Johnnie Fleming, Jr.

GEICO and The Jefferson Hotel contributed as Lighting the Way sponsors. Dominion Energy and SunTrust as Old Dominion sponsors. First Baptist Church, Centralia, Virginia Union University and Virginia Premier as VIP table sponsors. Media sponsors were 106.5 The Beat and WRVA 1140AM. Media partners were M2M Events, Beyond the Bottom Line, II, LLC, and M2M Events. The Richmond Leadership Council, co-chaired by Dianna Ruffin, and chair of the program planning committee, Kimberly Conley, were also integral to the success of the event.

“Working with Gov. Northam and his administration was a delightful experience. Because of the overwhelming energy and excitement from our attendees, plans are already underway to celebrate once again with community partners in September 2020—continuing to raise the bar to help students have equal access to a college education,” Byrd added.

See images from the event:

For information on how you can support the local Richmond office of UNCF, please visit UNCF.org/Richmond or contact Byrd at robin.byrd@uncf.org or 804.203.2166.

About UNCF
UNCF (the United Negro College Fund) is the nation’s largest and most effective minority education organization. To serve youth, the community and the nation, UNCF supports students’ education and development through scholarships and other programs, supports and strengthens its 37 member colleges and universities, and advocates for the importance of minority education and college readiness. UNCF institutions and other historically black colleges and universities are highly effective, awarding 21 percent of African American baccalaureate degrees. UNCF administers more than 400 programs, including scholarship, internship and fellowship, mentoring, summer enrichment, and curriculum and faculty development programs. Today, UNCF supports more than 60,000 students at over 1,100 colleges and universities across the country. Its logo features the UNCF torch of leadership in education and its widely recognized trademark, ‟A mind is a terrible thing to waste.”® Learn more at UNCF.org or for continuous updates and news, follow UNCF on Twitter at @UNCF.