This will be the band's first performance in the famous Parade.

Benedict College Marching Tiger Band of Distinction is about to make some big noise in New York. The band will be performing in the 2022 Macy’s Thanksgiving Day Parade®, Thursday, Nov. 24, representing the state of South Carolina. This will mark the first Parade appearance by the band. The Benedict College Marching Tiger Band of Distinction will join the celebration at the call of “Let’s Have a Parade™,” the iconic phrase that has signaled the start of the beloved annual holiday tradition since 1924. [Benedict College is a UNCF-member institution.]

The band appeared on the “TODAY Show with Craig Melvin” on Monday, and also will perform in New York City’s Central Park Wednesday, Nov. 23, at 2 p.m. The Thanksgiving Day Parade is live on NBC on Thursday at 9 a.m. in all time zones, and streaming on Peacock.

Each year, the Macy’s Parade Band Committee looks for bands that have the stage presence and musical expertise to captivate the streets of New York City and millions of viewers across the country. Benedict College Marching Tiger Band of Distinction was selected from more than 100 applicants as one of nine selected bands to march in the 96th edition of the annual holiday spectacle. The band will join the revelry along with other iconic Macy’s staples: floats, giant character balloons, clowns and superstar performers galore, helping to create an unforgettable experience for millions.

See the Band Getting Ready for the Big Trip 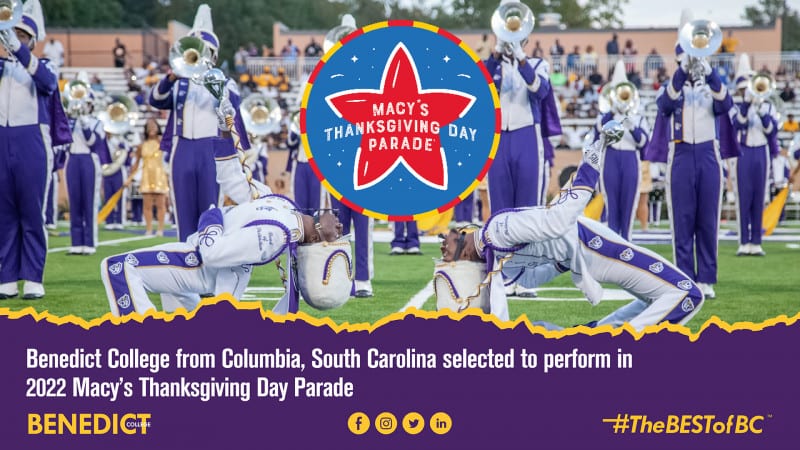 “Energetic, exciting and entertaining – these words perfectly describe the Benedict College Marching Tiger Band of Distinction and the incredible sound and spirit they deliver at every single performance,” said Wesley Whatley, creative producer, Macy’s Thanksgiving Day Parade. “Macy’s is so proud to introduce this incredible group to our Parade audience on Thanksgiving morning for their big debut!”

“The Macy’s Thanksgiving Day Parade is a quintessential holiday tradition,” said Dr. Roslyn Clark Artis, President and CEO of Benedict College. “I can think of no better way to showcase the showmanship, talent and precision of the Benedict College Tiger Band of Distinction than to watch them march down the streets of New York City on Thanksgiving Day!”

For more than 90 years, Macy’s Thanksgiving Day Parade has given thanks to what Macy’s values most—its loyal fans. More than 5,000 Macy’s employees and dedicated volunteers work tirelessly to create a spectacular event that entertains the cheerful crowds and provides joy to millions at home watching on Thanksgiving Day. Stretching down a more than two-mile-long route in New York City, the spectacle is alive with gleaming color, music and smiles.

The college will have one of the most affordable tuition cost among the South’s prestigious private colleges and universities.
Are you a High School Senior? Here's what you need to know when applying to an #HBCU.