Known for their respective philanthropic activities, the families’ combined donations total $604,000 with the Aarons contributing $250,000 personally and an additional $104,000 through their Chasing the Dream Foundation and the Mooreheads donating $250,000 to B-CU. Both families share in longtime commitments to historically black colleges and universities, including Howard and Grambling State universities in addition to B-CU.

Legendary baseball star Hank Aaron and his wife, Billye, are longtime advocates for higher education having raised millions of dollars for scholarship funding for UNCF, HBCUs and their own Chasing the Dream Foundation, which has sponsored hundreds of students to attend HBCUs. The Aarons have been longtime supporters of B-CU, creating a $200,000 endowment in honor of Joyce Moorehead during her time as a member of the B-CU Board of Trustees. Since its inception, the endowment has funded thousands of student scholarships.

Billye Aaron has served on trustee boards for both Texas and Morehouse colleges and numerous buildings have been named in their honor to recognize them for the millions they have contributed, including at Atlanta Technical College and at Morehouse College’s Student Pavilion.

“We are pleased to provide support for the achievements of young people with limited opportunities and enable them to develop their talents and pursue their dreams,” the Aarons said together. 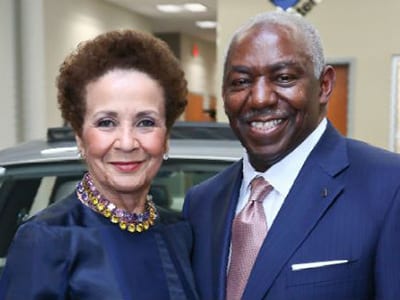 B-CU holds personal significance for Joyce Hanks Moorehead, a graduate and an attorney whose parents were educators and friends with B-CU founder Dr. Mary McLeod Bethune. Moorehead and her husband, The Moorehead Residential Life Center on the B-CU campus was named in their honor in 2016.

“As a proud graduate of B-CU, I owe much of my personal and professional success to the training and nurturing I received as a student at Bethune-Cookman,” Joyce Moorehead said. “We hope that this gift will likewise inspire other alumni and philanthropists to support all HBCUs but particularly Bethune-Cookman.”

“The generous support from the Aarons and Mooreheads affirm their belief in and commitment to B-CU at this crucial time,” said B-CU President E. La Brent Chrite. “My hope is that others will be similarly inspired and influenced to help support this extraordinary institution Dr. Mary McLeod Bethune envisioned and established”

B-CU recently launched its Advancing the Legacy campaign to preserve Dr. Bethune’s accomplishments for the future. The campaign was announced in Washington, DC, in collaboration with the National Council of Negro Women, Inc., which was founded by Dr. Bethune. The effort has raised over $5 million to help close a financial gap in scholarship funding. Those who want to contribute can donate at the effort’s website at www.advancingthelegacy.com.

Belvin Perry, Chair, B-CU’s Board of Trustees expressed gratitude for the commitments from both families. “We have come a very long way to building a new future for this great University. We are profoundly grateful for this remarkable level of support.”