Grant is first investment of Bloomberg Philanthropies’ Greenwood Initiative, an effort to accelerate the pace of Black wealth accumulation and address systemic underinvestment in Black communities

Mike Bloomberg today announced that Bloomberg Philanthropies will support the nation’s four historically Black medical schools with $100 million to help increase the number of Black doctors in the U.S. by significantly reducing the debt burden of approximately 800 medical students, many of whom face increased financial pressure due to COVID-19. This is the largest-ever individual philanthropic gift received by Meharry Medical College, Howard University College of Medicine, Morehouse School of Medicine and Charles R. Drew University of Medicine and Science. Currently in the U.S. only five percent of practicing physicians are Black yet data proves that Black patients—who are twice as likely to die from COVID-19 than white Americans—have better outcomes when treated by Black doctors. More Black doctors will mean more Black lives saved in America as well as a reduction of the health issues that end up suppressing economic opportunity in Black communities. Bloomberg Philanthropies’ grant to the medical schools will allow them to provide scholarships up to $100,000 to nearly every medical student currently enrolled and receiving financial aid over the next four years. This is the first investment of Bloomberg Philanthropies’ Greenwood Initiative, a new effort to increase generational wealth among Black families and address systemic underinvestment in Black communities. 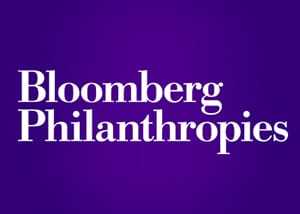 Across the country, Black Americans are more likely than white Americans to die at nearly every stage of life. Most recently, the Black community has suffered the highest death rate from COVID-19. Black people are almost three times more likely than white people to contract the virus, and twice as likely to die from it. Experts cite a variety of factors contributing to this inequity, including pre-existing conditions and lack of access to trusted healthcare providers.

Black patients overall have better outcomes when treated by Black doctors. But only five percent of practicing physicians are Black, while Black people make up 13% of the U.S. population. Although Black doctors are more likely to serve minority patients, and in medically-underserved areas, the devastating economic impact of the current pandemic threatens to worsen existing disparities potentially preventing current Black medical students with financial need from completing their degrees or by forcing Black medical school graduates to pick specialties that offer higher pay in the interest of paying off their medical school debt. Ultimately, the pandemic could both slow the placement of Black doctors in communities with the most need and significantly limit the ability of historically Black medical schools (HBMS)—which have produced as many Black medical school graduates over the last 10 years as the top 10 non-HBMS with the highest number of Black graduates—to meet increased demand for financial assistance.

With this strategic investment, Bloomberg Philanthropies strives to reduce health and wealth disparities in Black communities by improving health outcomes for Black Americans and accelerating the Black community’s ability to create generational wealth.

“COVID-19 has been especially devastating for the Black community, and the scarcity of Black doctors practicing in Black communities is one reason for it,” said Michael R. Bloomberg, founder of Bloomberg Philanthropies and Bloomberg LP, and three-term mayor of New York City. “More Black doctors will mean more Black lives saved and fewer health problems that limit economic opportunity. But right now, the burden of student debt and lack of financial aid means that the shortage of Black doctors could get even worse. During my campaign for president, I proposed a set of bold policies—which we called the Greenwood Initiative—to increase generational wealth among Black families and shrink the racial wealth gap. The commitment Bloomberg Philanthropies is making today is just the first step we will take to bring that work to life.”

Meharry Medical College, Howard University College of Medicine, Morehouse School of Medicine, and Charles R. Drew University of Medicine and Science will determine the eligibility of their students currently enrolled and receiving financial aid for scholarships up to $100,000 ($25,000 for each year of medical school from 2021 through the academic year that ends in 2024). Students currently in years two, three, and four of medical school will receive retro-active scholarships, meaning that they can receive up to $100,000 in support regardless of whether they are graduating in 2021 or 2024. With the goal of reducing debt load, the grants can be used for tuition and fees, depending upon the school. In 2020, over 50% of all students enrolled at these four schools should benefit from this gift. Recent data suggests that this support will significantly reduce the debt burden of these medical students. The grant also includes “wrap around” services, such as financial counseling for students and resources to track the program’s success, for each school.

“Meharry graduates overwhelmingly choose to go into primary care so they can make the largest impact on the most people,” said Dr. James Hildreth, President and CEO of Meharry Medical College. “But primary care, particularly in rural areas, does not provide the same level of financial security as other medical specialties. This transformative gift from Bloomberg Philanthropies will significantly ease the burden of debt for our students, allowing them to make the decision of what and where they practice based on passion, not a paycheck.”

“Healthcare disparities exist for a myriad of reasons related to systemic infrastructural issues, not the least of which is the dearth of Black doctors. Black doctors with cultural competency are a major part of the solution, but their path is often hampered by a compromised financial situation,” said Dr. Wayne A. I. Frederick, President of Howard University. “This gift from Bloomberg Philanthropies is the first stone dropped into a calm lake of opportunity and promise. The ripple effects that it will have on the lives of our students and our programs will carry on for generations.”

“Now, more than ever before, the world needs what we do best. At MSM, we believe that instilling cultural competence in our future physicians is a key part of closing the health equity gap,” said Dr. Valerie Montgomery Rice, President and Dean of Morehouse School of Medicine. “With the generosity of Bloomberg, we can increase our investment in the next generation of clinicians and researchers in ways that advance prosperity and increase the quality of life in communities thought to be out of reach. For us, it’s about creating innovative strategies for science and healthcare that pave the bridge to a brighter future.”

“Since studies have demonstrated that African American patients are more likely to follow an African-American physician’s orders, particularly on preventive measures, this scholarship gift to help increase the number of Black doctors will be transformative in creating greater health in communities of color,” said Dr. David M. Carlisle, President and CEO of Charles R. Drew University of Medicine and Science. “It helps relieve the crushing burden of medical school student debt for low-income African American students, particularly the great number who wish to set up a practice in medically under-resourced communities of color.”

This is the first investment by Bloomberg Philanthropies’ Greenwood Initiative, born out of a commitment Mike Bloomberg made earlier this year during his campaign for U.S. President to help accelerate the pace of wealth accumulation for Black individuals and families and to address decades of underinvestment in Black communities nationwide. Bloomberg Philanthropies will partner with leaders and organizations across the country to implement, scale, and advocate for efforts that increase economic and social mobility—and ultimately create intergenerational wealth for Black people in America.

As a business owner, mayor, and philanthropist, Mike Bloomberg has a long-standing commitment to reducing health disparities, addressing the most complex public health crises, and improving access to quality K-12 and higher education for lower income students.