“A mind is a terrible thing to waste,”® the iconic UNCF motto, is an indelible credit to Jordan’s leadership

UNCF, its 37 member historically Black colleges and universities (HBCUs), and all students we serve were saddened to hear of the passing of Vernon Eulion Jordan, Jr. Jordan was an extraordinary human being—Civil Rights icon, business trailblazer, adviser to presidents—a man for all seasons. Deeply rooted in Atlanta, he was shaped by an extraordinary family and a Black community that recognized that he was destined to leave a powerful mark on America through his work and his unstinting civic life. Yet, always, he was a generous mentor, counselor and guide who helped shape scores of young men and women who, today, are leaders, excellent in what they do and better because Vernon Jordan spent time with them.

Jordan was a champion of UNCF for more than half a century. As part of his amazing life’s journey, in 1970 he began his tenure as UNCF’s executive director, where he raised $10 million for students in just 10 months. Over the years, he participated in countless UNCF fundraising campaigns and events. Jordan was honored at the UNCF national gala in 2011 for his contributions to UNCF and Black higher education, and again participated in UNCF’s 75th national gala to honor Robert Smith in 2019. 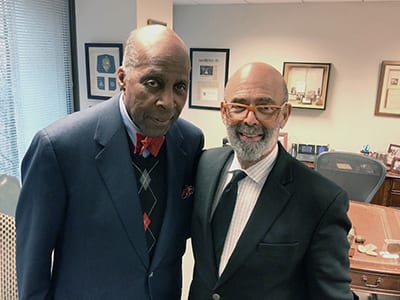 Among his most enduring legacies—and the one that has made an indelible imprint on UNCF, HBCUs, Black college students and the country—was a public relations campaign that he began when he approached friends at the Young and Rubicam Advertising Agency and the Ad Council about developing and sharing a message for the venerable organization that he was leading at the time—UNCF. Working together, Jordan, UNCF and the advertising agencies launched the iconic “A mind is a terrible thing to waste”® in 1972 in newspapers and television all over the country. Its popularity grew, pulling in talent from the era—particularly memorable is the booming voice of actor James Earl Jones—that burned the iconic UNCF motto into so many American memories for decades to come. With that advertising tagline, UNCF’s awareness grew into a national brand, moving the tagline onto an official motto.

During an interview in 2011 about the history of the campaign, Jordan would go on to say about his monumental effort, “Frankly, I loved it. And then [former Y&R Executive] Ed Ney and I went to the Advertising Council to sell it. We did not have to do much selling.”

“The news of Vernon’s passing is heartbreaking for all of us who were honored to know him,” said Dr. Michael L. Lomax, president and CEO of UNCF. “Vernon’s time at UNCF was brief, less than two years, but he accomplished so much in co-creating our motto and launching the public service advertising campaign that made ‘A mind is a terrible thing to waste’® a global slogan and raised billions of dollars to support Black students and HBCUs. He helped ensure that, today, UNCF is an enduring American institution. UNCF will forever be indebted to Vernon Jordan, and we will always remember his extraordinary contributions to our mission.”

About UNCF
UNCF (United Negro College Fund) is the nation’s largest and most effective minority education organization. To serve youth, the community and the nation, UNCF supports students’ education and development through scholarships and other programs, supports and strengthens its 37 member colleges and universities, and advocates for the importance of minority education and college readiness. UNCF institutions and other historically Black colleges and universities are highly effective, awarding nearly 20% of African American baccalaureate degrees. UNCF administers more than 400 programs, including scholarship, internship and fellowship, mentoring, summer enrichment, and curriculum and faculty development programs. Today, UNCF supports more than 60,000 students at over 1,100 colleges and universities across the country. Its logo features the UNCF torch of leadership in education and its widely recognized trademark, “A mind is a terrible thing to waste.” ® For continuous updates and news, follow UNCF on Twitter at @UNCF.