UNCF Report Calls for Congress to Increase Funding for HBCUs

Elected representatives and private donors need to redouble their support for historically Black colleges and universities (HBCUs), according to a report issued today by UNCF.

Entitled Greater Funding, Great Needs: A Report on Funding for HBCUs, the new UNCF report reveals the influx from the past two years of federal government funding and private donations are not enough and do not begin to make up for decades of neglect.

“Thanks to the massive influx of funding and private donations, HBCUs entered 2022 in a much stronger position than before the start of the pandemic,” said Murray,

“If Congress fails to act now, HBCUs now run the risk of losing out on funding from stakeholders who may erroneously believe the need has lessened. Now, a critical challenge for HBCUs will be overcoming common myths about these institutions.” 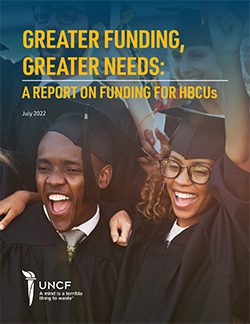 Over the past two years, HBCUs have distinguished themselves in the face of uncertainty and difficulty resulting from the COVID-19 pandemic and civil unrest from the death of George Floyd, which brought renewed and broader attention to growing racial justice issues.

“HBCUs continue punching above their weight, producing graduates who are productive citizens contributing to the success of our country, and they have an annual impact on our national economy of $15 billion,” Murray said.

“HBCUs innovated to embrace remote learning and redirected funds to provide their students with much-need support. And they received an outpouring of funding; the federal government allocated more than $6.5 billion to 101 HBCUs over the past two years, and private donors have significantly stepped up their giving. As a result, HBCUs gained a renewed sense of optimism and hard-won resilience.”

However, for decades, “the federal government has ignored its legally mandated obligations to allocate funding at prescribed levels,” noted Murray. “There’s an inherent immorality that underpins this pattern that HBCUs are the institutions that perform the best for Black students, yet they remain chronically underfunded. What’s more, this cycle feeds the perception that they aren’t worthy of support,” said Murray.

“The goal was to better understand each responding institution’s ability to gain access to federal funds and increased philanthropic donations during the COVID-19 pandemic,” said Nadrea Njoku, director, Frederick D. Patterson Research Institute, UNCF. The survey also highlighted the fiscal condition of HBCUs, their funding needs and their top priorities for the coming year. In all, executive leaders from 31 HBCUs participated.

Respondents noted funds over the past two years were used to implement and upgrade technology on campus to better assist students and faculty with delivering and accessing remote instruction during and throughout the pandemic. Also, funds were used to stabilize operations to cover payroll expenses, improve technical capabilities by giving students laptop computers, and help students ease their debt. However, funding for the maintenance of obsolete buildings and student housing has not kept pace.

Federal spending bills such as Build Back Better and the IGNITE HBCU Excellence Act would allocate significant levels of funding to HBCUs, but they are currently stalled in Congress.

In addition to shortfalls in deferred maintenance for facilities, the endowments of HBCUs are just a fraction of their non-HBCU counterparts, according to the UNCF report.

Colleges and universities use endowments to support among other things scholarships, upgrade facilities and hire faculty. The report found, “endowments at HBCUs currently trail those of other institutions by at least 70%.” A GAO study identified in the report found HBCUs have an average of $15,000 in endowment per student, compared with $410,000 in endowment per student at comparable non-HBCUs.

To increase the funding needs of HBCUs, the report offered the following calls to action:

“There is much more work to be done, but UNCF is constantly building up its broad coalition of stakeholders to ensure Black students and HBCUs have the resources they need to thrive. My hope is that policymakers, elected representatives and private donors use this report as a fact base to inform their funding decisions and redouble their support for HBCUs,” said Murray. 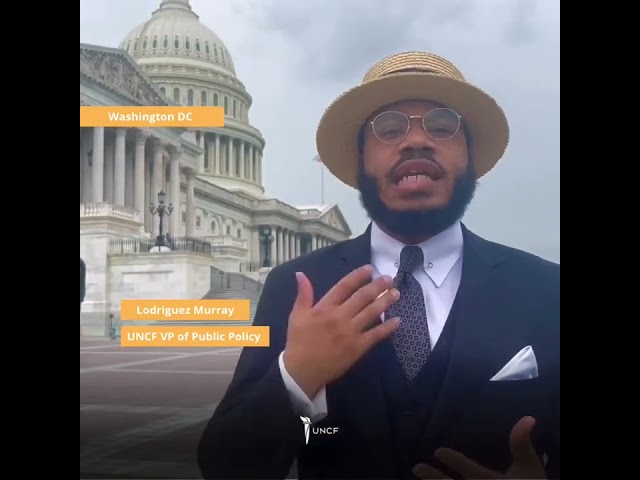 UNCF (United Negro College Fund) is the nation’s largest and most effective minority education organization. To serve youth, the community and the nation, UNCF supports students’ education and development through scholarships and other programs, supports and strengthens its 37 member colleges and universities, and advocates for the importance of minority education and college readiness. While totaling only 3% of all colleges and universities, UNCF institutions and other historically Black colleges and universities are highly effective, awarding 13% of bachelor’s degrees, 5% of master’s degrees, 10% of doctoral degrees and 24% of all STEM degrees earned by Black students in higher education. UNCF administers more than 400 programs, including scholarship, internship and fellowship, mentoring, summer enrichment, and curriculum and faculty development programs. Today, UNCF supports more than 60,000 students at over 1,100 colleges and universities across the country. Its logo features the UNCF torch of leadership in education and its widely recognized trademark, ‟A mind is a terrible thing to waste.”® Learn more at UNCF.org or for continuous updates and news, follow UNCF on Twitter at @UNCF.