Clark Atlanta Univ. President One of Atlanta’s “500 Most Powerful Leaders”

George T. French Jr., Ph.D. the fifth president of Clark Atlanta University (CAU), has been recognized as one of Atlanta’s 500 most powerful and influential leaders by Atlanta Magazine. 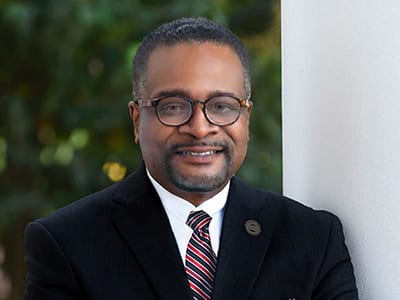 French was named President of CAU, the largest UNCF institution, in 2019. Since taking the helm, he has continued his extraordinary work as a leader and influencer in higher education and policy. Under French’s leadership, Clark Atlanta University received the largest unrestricted donation in the university’s history from philanthropist MacKenzie Scott, totaling $15 million and has received $6.6 million in financial support from the CARES Act.

“I am honored to be recognized by Atlanta Magazine along with so many outstanding and accomplished colleagues in the higher education category,” said President French.  “The development of our youth, particularly students in the African American community, has always been my passion. It is my calling to nurture, grow, develop and create game-changing opportunities for students who attend Clark Atlanta University and other HBCUs across the nation. To be recognized for doing something that has a positive impact for the greater good of our society and communities is truly heartwarming.”

French led and continues to lead the institution through the COVID-19 pandemic, which required CAU faculty to quickly and successfully transition from on-ground learning to remote learning in the early stages of the global health crisis.  His passion for students and their success led to the university purchasing 4,000 laptops from Dell Computers for every financially enrolled CAU undergraduate and graduate student to ensure they were equipped with the resources needed to make the transition to online learning during the pandemic.

French also serves as the chair of the Atlanta University Council of Presidents and chairs the Council of Presidents of the Southern Intercollegiate Athletic Conference. He is the secretary of member presidents and chair of accreditation for UNCF and vice-chair of the board of directors for the National Association for Equal Opportunity in Higher Education. French is the co-founder of the Higher Education Leader, Foundation and he serves on the Southern Association of Colleges and Schools (SACSCOC) Board of Trustees and the National Advisory Committee on Institutional Quality and Integrity.

Atlanta Magazine distributes an annual list of 500 distinguished leaders from nominations it receives from the public, through social media to identify people who are unsung visionaries. The magazine’s extensive selection process involves consulting experts across different sectors as well.