“The most meaningful thing is to be able to see this many Black professionals.”--Deidra Shores, SLC participant 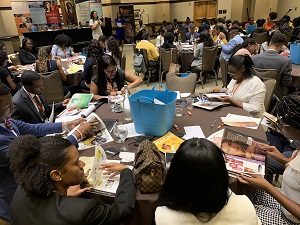 Charged with stepping into their full potential, the students heard from education and corporate leaders who poured into them advice on how to excel in internships, enhance their verbal and written communications, foster relationships with colleagues, uphold professional etiquette and more.

The multi-day conference—aimed at preparing students for success as early career professionals—additionally provides an opportunity for students to attend sessions catered to their specific career track of interest.

“Strive to be significant,” Grammy® award-winning record executive Amir Windom told the audience of students. “In your internships, ask yourself if you’re doing all that you can do. Go hard when you’re there. Don’t just do what you’re told to do. Go above and beyond.”

Throughout his presentation titled “Being a Standout Intern,” Windom detailed strategies he executed to become one of the youngest executives in the music industry. He advised students to keep purpose first in their endeavors, to surround themselves with people that motivate and challenge them to be greater and to not be afraid to “transcend culture.”

Being able to hear from some great leaders in the Black community and the nation as a whole has been remarkable.

Part of being an effective leader involves knowing how to speak publicly, conference presenters said. A session on elevator pitches and public speaking featured several activities in which students practiced their 15-second pitches and being intentional with their body language.

“Your body language is something you see before anything comes out of your mouth. If you have a frown on your face, if you’re not open … if your stance isn’t comfortable, then your audience won’t be comfortable,” said Arnika Jackson, UNCF’s senior relationship manager.

Jackson told students to “never dim your light for anybody” and to highlight their value when speaking with prospective employers or others they would like to add to their professional network. She informed the students about three types of elevator pitches they should know: one to add someone to their network, one to find a mentor and one to seek out a job opportunity.

“Make sure you’re doing the research on the person you’re pitching too,” Jackson added. “If it’s an alma mater that you have in common, if it’s a sport you are both interested in … find something to attach yourself to that person. What that’s going to do is make them open to hear you.”

As students begin to cultivate their public speaking and communication skills in their experiential learning opportunities, Jackson said they should leave with someone knowing their name and what they can do.

Deidra Shores, a recent mass media arts graduate of Clark Atlanta University, said she has enjoyed the conference so far because of its “real world advice” that you usually don’t hear on other panels, she said.

“The most meaningful thing is to be able to see this many black professionals,” she said, noting that it was also affirming to see that many of the professionals did not spend as much time in the industry areas they are excelling in now. This observation raised the importance of developing cross-over skills, Shores said.

Two things she takes away from the conference are the importance of networking and going the extra mile. During a conference session on professional etiquette, for instance, she connected with the presenter who happened to be a Clark Atlanta alumna.

Speaking about the value of showing up, Shores said, “just make the effort to be great because people can see that. They can see that you’re hungry.” Going forward, Shores envisions herself in a director role where she will be able to create content and fulfill her passion for informing and supporting the people in her community.

Other sessions at the gathering helped students develop SMART [specific, measurable, attainable, relevant and timely] goals for career development through a vision board activity, and prepared them to “Level Up” while pursuing their intended careers.

They offered students advice about the need to “live in their truth” and to be over prepared, curious, unafraid of failure and open to opportunities in the workforce.

Dewey Norwood Jr., relationship manager for Wells Fargo’s corporate responsibility and community relations, said experiential opportunities, such as those provided by Wells Fargo, are invaluable for students due to the mentorship, industry exposure and financial support embedded in the opportunities.

Wells Fargo’s career development initiatives, like its monthly “Beyond College” webinar series, aim to engage students early in their higher education journey and allows them to “dip their toe in the water” to confirm—or rethink—their career interests, Norwood said.

Efforts to diversify the workforce and engage with HBCUs specifically have resulted in strategic partnerships between the organization and UNCF and the Thurgood College Marshall Fund (TMCF).

Through these partnerships, students and recent graduates from UNCF- and TMCF-member schools can secure internships that provide financial resources, pair them with mentors in the industry or allow them to attend professional programming and events like the UNCF Empower Me Tour, the UNCF Student Leadership Conference, the TMCF Innovation and Entrepreneurship summit or the TMCF Teacher Quality and Retention Program.

Jordan Davis, a rising senior English major at Morehouse College, said the conference has been “amazing.”

Learning about networking properly, engaging professionals and crafting elevator pitches to sell themselves were some of Davis’ conference takeaways.

“Being able to hear from some great leaders in the black community and the nation as a whole has been remarkable,” he said, noting that the conference has “been like a training session for what’s to come for the summer.”

Davis has an interest in education law and will be spending the summer working with Friendship Charter School on education policy and other operations. Referencing the school choice movement and previous incidents of black valedictorians having their achievement undermined, he said he wants to be “on the front lines of the fight.”

“Be present. Make the most of every opportunity. Network,” he said. “There are so many amazing scholars at the conference. You never know who you’re sitting next to or where they’ll be 15 years from now.”

Taliah Givens, senior director of student professional development programs at UNCF, said the diverse backgrounds and professionalism of her team played a role in putting together the conference for students.

“If our goal is to teach them professional or career development, the program has to model what we’re trying to teach,” she said, noting that the conference was birthed out of two prior UNCF programs: the Walton UNCF K-12 Education Fellowship and the Gateway to Leadership programs.

“The interesting thing about this conference is that it’s not about coming in, looking good and getting fluff. This is a learning experience; it’s a curriculum,” Givens said. “We want the students to retain what they are learning. We are talking about a span of showing up on time, to making sure that you are bringing value to the work.”

This article by Tiffany Pennamon originally appeared in Diverse: Issues in Higher Education