UNCF Statement on the Passing of Bill Gates, Sr.

UNCF is saddened by the recent loss of Bill Gates, Sr., who directed much of the Bill and Melinda Gates Foundation work, particularly the work related to UNCF’s Gates Millennium Scholars Program, and helped build the foundation into one of the most significant philanthropies in the United States.

“Bill Sr. was often the face of the work that we did over the years with the foundation,” said Dr. Michael L. Lomax, UNCF’s president and CEO. “I’ve had many discussions with him over the years of collaborating with the foundation, and his dedication to UNCF and supporting our students and historically Black colleges and universities (HBCUs) was strong and steadfast. He was a firm believer in ‘to those whom much is given, much is required’ and helped direct the vast resources of the foundation to make true existential change for our students and HBCUs.” 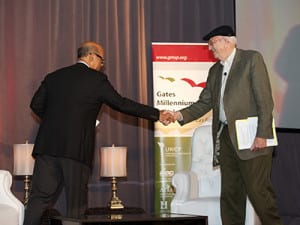 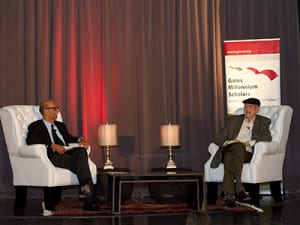 In 1999, the Bill and Melinda Gates Foundation launched the Gates Millennium Scholars Program with UNCF, ultimately funding more than 20,000 college students with full-ride scholarships and mentorship support to the college or university of their choice, all the way through to a doctoral level. The total donation to support this 20-year behemoth endeavor—to change lives and bring large-scale, vital resources to enable students of color to earn college degrees—was more than $1.6 billion. It remains to this day the largest private scholarship/mentorship program and investment in students of color in the United States.

“Thanks to Bill Sr.’s guiding hand and Bill and Melinda Gates, we’ve had a decades-long relationship with the foundation. Together, we all believed that if you reduced the financial barrier for talented students of color with limited financial resources that the students would achieve academic success. After funding 20,050 students who have achieved more than a 90% graduate rate—an achievement equal to the most selective institutions—our collective belief was proven correct,” Lomax explained.

“We cannot thank Bill Sr. and his family enough for their support of UNCF. Together, we believe that ‘A mind is a terrible thing to waste, but a wonderful thing to invest in.’ And Bill Sr. made that belief a reality each day, one that is historic and powerful which showed that talented, deserving students across our nation, if given the right support and opportunity, can be developed into our next generation of leaders. That belief, which is core to UNCF’s mission, has fueled the lives of untold thousands, enabling better futures for us all,” Lomax added. “We are heartened that the Gates Foundation will continue its mission to help humanity, leading all of us to more healthy and productive lives. And, we know that while Bill Sr. has left us, the foundation will continue to carry on in his steps and the wide path he so clearly forged.”

UNCF (United Negro College Fund) is the nation’s largest and most effective minority education organization. To serve youth, the community and the nation, UNCF supports students’ education and development through scholarships and other programs, supports and strengthens its 37 member colleges and universities, and advocates for the importance of minority education and college readiness. UNCF institutions and other historically black colleges and universities are highly effective, awarding nearly 20% of African American baccalaureate degrees. UNCF administers more than 400 programs, including scholarship, internship and fellowship, mentoring, summer enrichment, and curriculum and faculty development programs. Today, UNCF supports more than 60,000 students at over 1,100 colleges and universities across the country. Its logo features the UNCF torch of leadership in education and its widely recognized trademark, ‟A mind is a terrible thing to waste.”® Follow UNCF on Twitter at @UNCF.

Each year, 5,000 high-performing, low-income students attend and graduate from some of the most selective private and public schools in the country, thanks to the Gates Millennium Scholars Program.