Nearly 70 percent of low-income African American youth surveyed indicate success in school is a top priority, and 89 percent agree it is important to obtain a post-secondary education, according to a new report issued by UNCF’s Frederick D. Patterson Research Institute (FDPRI).

A Seat at the Table: African American Youth’s Perception of K-12 Education is the third report in UNCF’s three-part series[1] on African American communities’ views of K-12 education. This newest research, which is a call to action around pre-kindergarten through post-secondary education, will be released during an annual education summit hosted today by UNCF. The summit serves as a platform for engagement and exploration of the role of African American students, leaders and voices—specifically the role of HBCUs—in education reform efforts, as UNCF seeks to ensure that these perspectives are truly amplified in both research and engagement efforts. View the Education Summit on Facebook Live

“Contrary to a pervasive narrative that racial disparities in education are the sole result of disengaged students, African American youth indicated that success in school was their most important priority among other competing factors,” said Dr. Michael L. Lomax, president and CEO of UNCF. “This is important because research suggests that students who are more engaged and more optimistic about education are more likely to aspire to attend college.”

Sekou Biddle, vice president for K-12 advocacy at UNCF, explained that community leaders play an integral role in bringing communities together to understand the educational realities black students face. “The findings suggest a need for concerted effort among schools, non-profits, colleges and universities, including HBCUs, philanthropic organizations, and community leaders to help decrease information asymmetries about the college-going process, as the data show students are eager to attend college, but lack guidance on how to pay for it,” he said. The report challenges public policy advocates at the federal level to continue to support FAFSA simplification in the HEA reauthorization so students can better navigate this process. A Seat at the Table also suggests that HBCUs can provide key guidance by administering programmatic support to students early in their college experience that address issues like financial literacy, including financial aid, time management and career readiness.

FDPRI researchers analyzed survey data from the Inner City Truth 3 (ICT3) survey. ICT3 is the third iteration of a national survey of 1,700 low-income African American and Latino youth and young adults, ages 16-20. Participants were surveyed in the following cities in 2013: Los Angeles, Long Beach, Oakland and Richmond, California; Philadelphia, Chicago and Atlanta. Census tracts identified participants with average household income under $40,000. For this report, the sample was limited to African Americans, yielding a total of 797 participants.

The key findings of the report highlight perceptions of success, education and future aspirations held by low-income African American youth, who report substantial drive and determination, despite significant obstacles and negative narratives regarding their success. Overall, the results illuminate the importance of including student voices in understanding aspirations, school-level practices and educational environments. 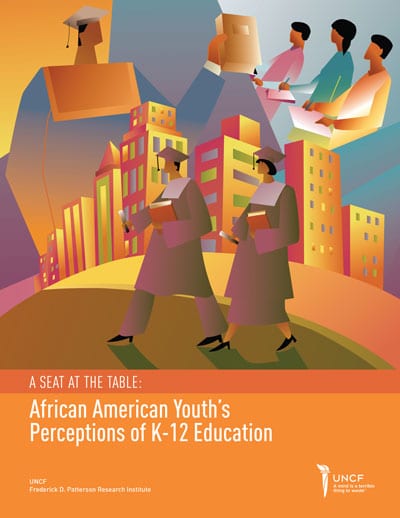 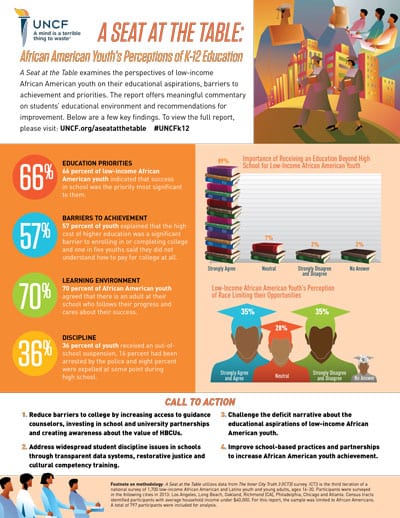 View the report’s one pager here

About UNCF
UNCF is the nation’s largest and most effective minority education organization. To serve youth, the community and the nation, UNCF supports students’ education and development through scholarships and other programs, strengthens its 37 member colleges and universities, and advocates for the importance of minority education and college readiness. UNCF institutions and other historically black colleges and universities are highly effective, awarding 20 percent of African American baccalaureate degrees. UNCF annually awards $100 million in scholarships and administers more than 400 programs, including scholarship, internship and fellowship, mentoring, summer enrichment, and curriculum and faculty development programs. Today, UNCF supports more than 60,000 students at more than 1,100 colleges and universities across the country. Its logo features the UNCF torch of leadership in education and its widely recognized trademark, “A mind is a terrible thing to waste.”® Learn more at UNCF.org, or for continuous news and updates, follow UNCF on Twitter, @UNCF and #UNCFK12.  Contact UNCF