The Numbers Don’t Lie: HBCUs Are Changing the College Landscape

The landscape of African American students in higher education has always been extremely dynamic, and our modern times are no exception. We’ve compiled some key statistics to paint a picture of the current state of affairs.

The Challenge:  Getting Through College Successfully

As much progress as we’ve made, there is still clear room for improvement when it comes to retaining and graduating all students of color at our nation’s colleges and universities, but particularly among African Americans. Among Black students enrolled in four-year public institutions, 45.9% complete their degrees in six years. This is the lowest rate compared to other races and ethnicities. African American men have the lowest completion rate at 40%. Thirty-three percent of White Americans 25 and older have at least a bachelor’s degree, compared to 19% of Black Americans.

Many of the hurdles these students face are financial in nature. Seventy-two percent of Black students take on debt as they seek their degrees, as opposed to 56% of their White peers. And while the number of African Americans enrolled in college has increased over the last few decades, going from 10% in 1976 to 12.7% in 2019, African American enrollment at the nation’s most elite colleges (often toting the biggest price tags) has remained mostly the same.

Some of the most heartening statistics come from our nation’s HBCUs. Though HBCUs make up only three percent of the country’s colleges and universities, they enroll 10% of all African American students and produce almost 20% of all African American graduates. HBCUs actively work to address the financial obstacles Black students face. On average, the cost of attendance at an HBCU is 28% less than attending a comparable non-HBCU. Forty percent of HBCU students report feeling financially secure during college, as opposed to 29% of Black students at other schools.

These students have an advantage long past graduation. A whopping 25% of African American graduates with STEM degrees come from HBCUs. Eight HBCUs were among the top 20 institutions to award the most science and engineering bachelor’s degrees to Black graduates from 2008-2012. An HBCU graduate can expect to earn an additional $927,000 in their lifetime, which is 56% more than they could expect to earn without their HBCU degrees or certificates. From start to finish, an HBCU education is a setup for success. 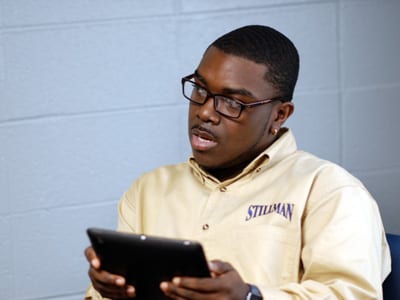 UNCF believes in the proven difference that HBCUs make, which is why we work so passionately to help more students attend them. As the nation’s largest private scholarship provider to students of color, UNCF also annually awards more than $72 million in scholarships to more than 10,000 students at more than 1,100 schools across the country. In nearly eight decades of work, UNCF has raised more than $5 billion to help more than half a million students earn college degrees. And all this support shows amazing results. UNCF scholarship recipients have a 70% six-year graduation rate, as opposed to the previously mentioned 45.9% average for Black students in general.

A UNCF scholarship can change a life. Unfortunately, however, we can still only help one in 10 students applying for financial assistance. Let’s cut that gap. Donate to UNCF today!