UNCF Board Changes: Corporate America Stepping Up to Support UNCF’s Strategy to Prepare HBCUs for the Future

Six new corporate leaders join 17 others on UNCF board, reflecting the broad diversity of America’s businesses committed to make a difference for students of color

“UNCF and HBCUs have experienced unprecedented donations and recognition of our important mission during the past two years. Today we take a major step forward to continue that momentum in aggressively growing a Board that will deliver increased leadership, funding and resources for all our UNCF-member institutions,” said UNCF Board Chairman Milton H. Jones, Jr. “We are thrilled to welcome this impressive group of diverse, experienced and talented corporate leaders to join in our progress as we support our member institutions and the students they serve.”

“We have a great deal at stake as we move forward to generate the resources HBCUs and UNCF-member institutions will need to remain viable and effective amid an uncertain economy,” said UNCF President and CEO Dr. Michael L. Lomax.

“I applaud Chairman Jones for building an energetic and engaged Board of corporate leaders to deliver on the funding and resource needs for our schools, ultimately leading toward the establishment of a UNCF Capital Campaign. We encourage all companies, large and small, to join in this campaign to support the future of Black education.”

Newly Appointed UNCF Board of Directors 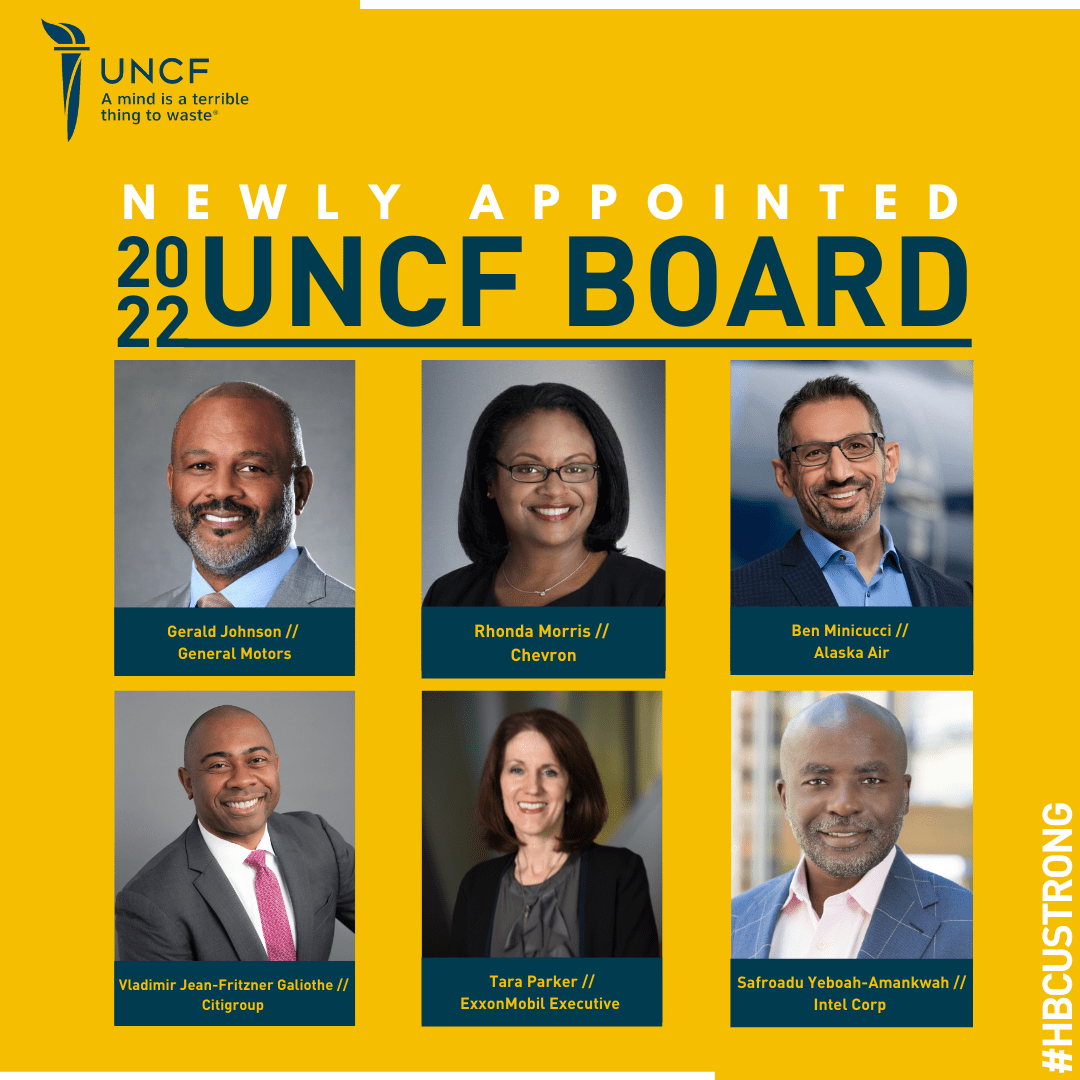 Mr. Galiothe joined Citi in 2001 after graduating from The University of Pennsylvania’s Wharton School with a Bachelor of Science degree. Galiothe has spent his entire 20 years trading derivative products in Equities, and for a short time in fixed income as well.

In addition to his role as a senior trader, he is a founding member of the Underrepresented Minority Senior Advisory Council in Markets. The primary objective of this committee is to build a long-term framework to help Citi be a leader in the recruitment and retention of diverse talent.

Vladimir is also a founding member of the Citi Institutional Clients Group’s Black Leaders for Tomorrow (BL4T) initiative. BL4T is an initiative created to help Citi attract and raise visibility of Black talent, expand development programs to support the unique needs of Citi’s Black colleagues and improve the culture of inclusion to increase engagement and retention.

Mr. Galiothe is also the current Co-Head of the Citi Markets Steering Committee. The steering committee consists of markets and human resource professionals who have the responsibility of making all decisions that impact the work lives of junior talent in the markets division.

Mr. Galiothe’s passion for helping others extends beyond Wall Street. He is also a benefactor of Equator Faith Mission, an organization focused on building and maintaining schools, health clinics and churches in his native country of Haiti, in addition to his other philanthropic efforts.

He is a member of Chairman and CEO Mary Barra’s Senior Leadership Team, and in January 2020, he was appointed to the GM PAC Board and Steering Committee. He is also a founding member of GM’s Inclusion Advisory Board. The goal of the board is to improve diversity, equity and inclusion within GM through words, deeds and culture; and ultimately help GM become the most inclusive company in the world.

Johnson started at General Motors in 1980, at the Fisher Body Plant in Euclid, Ohio. He earned a bachelor’s degree in industrial administration from Kettering University and a master’s degree in manufacturing operations from the Massachusetts Institute of Technology. He is on the Kettering University Board of Trustees. He has served as a mentor to many young professionals, as well as played an active role in community organizations. In March 2022, he was elected to the UNCF’s Board of Directors.

He was named BEYA’s 2021 Black Engineer of the Year, the organization’s top honor. In addition, the Manufacturing Leadership Council named him 2020 Manufacturing Leader of the Year for his work on GM’s COVID-19 emergency response building ventilators, manufacturing masks and implementing return to the workplace safety protocols used at GM and shared with suppliers and businesses globally. Johnson was also Automotive News’ All Stars 2021 sustainability executive of the year.

In March 2021, Johnson was elected to Caterpillar Inc.’s Board of Directors and serves on the company’s Public Policy and Governance Committee.

Ben Minicucci serves as CEO of Alaska Air Group, the parent company of Alaska Airlines and Horizon Air. The combined airlines carry more than 45 million guests a year on 1,300 daily flights to 115 destinations throughout the United States and to Canada, Mexico, Belize and Costa Rica.

Under the leadership of Minicucci and his team, Alaska is focused on low fares, profitable growth of the route network and creating an airline people love.

During Minicucci’s 18-year career with Alaska, he has contributed via various roles of increasing responsibility, becoming CEO on March 31, 2021.

In 2016, he was promoted to president of Alaska Airlines, and was also named CEO of Virgin America upon Alaska’s acquisition of the airline in December 2016 until the airlines merged under a single operating certificate in January 2018. He oversaw the integration of Alaska and Virgin America’s operations, processes and work groups. As president of Alaska, Minicucci was responsible for both operations and commercial functions. He led the execution of the company’s strategic plan including a focus on Alaska’s network, flight schedule, sales, revenue management, safety and operations, marketing and real estate.

In 2009, he was promoted to executive vice president and chief operating officer. During this time, he directed the implementation of a customer service-guiding framework, which empowers employees to deliver personal and kind-hearted experiences to guests, recognizing their unique circumstances instead of being bound by rigid company policies.

Minicucci joined Alaska in 2004 as staff vice president of maintenance.

Before joining Alaska, Minicucci spent seven years serving in a variety of roles at Air Canada’s technical operations and, ultimately, vice president of heavy maintenance. He served in the Canadian Armed Forces for 14 years prior to joining the private aviation sector.

Rhonda Morris is the chief human resources officer (CHRO) of Chevron, a leading, integrated energy company. Morris’s focus is on creating an environment where employees have access to opportunities and resources to achieve their full potential, while helping to achieve the company’s aspirations.

A key member of Chevron’s Executive Leadership Team, Morris reports directly to the chairman and CEO and has responsibility for shaping and driving Chevron’s people and culture strategy, including workforce planning, leadership succession, learning and talent, diversity and inclusion and total rewards.

Morris’ distinguished career in human resources is enhanced by years of business acumen developed through various positions in global marketing and international products, including a key operational role as the profit and loss leader for Chevron Products in Europe, where she made strong contributions to Chevron’s international downstream business.

During her CHRO tenure, Morris has become a sought-after thought leader on numerous subjects related to life, race and leadership. She helped launch the tremendously popular, “Leading in the B-Suite” series on LinkedIn with Adam Bryant, an author and former New York Times reporter and editor, which seeks to advance the conversation about race in corporate America. She is the first African American female corporate officer at Chevron and has received several distinguished honors and awards, including the National Diversity Institute’s “2021 Most Influential African American in Business”; the San Francisco Business Times’ “2019 Most Influential Women in Bay Area Business”; and Black Enterprise’s “2019 Most Powerful Women in Corporate America.”

She serves on the board of Techbridge Girls, a non-profit organization that excites, educates and equips girls from low-income communities to achieve economic mobility and better life opportunities and the board of Opportunity@Work a non-profit organization designed to rewire the labor market so that everyone Skilled Through Alternative Routes (STARs) can work, learn, and earn to their full potential. Morris is also a member of the HR Policy Association Board of Directors, the Bishop O’Dowd High School Board of Regents and the BetterUp Advisory Growth Council, a group of leading business, academic and human resources experts shaping the future of work.

She previously served on the boards of the Oakland Athletics Community Foundation, A Better Chance; the Math Engineering and Science Association at the University of California at Berkeley; the Consortium for Graduate Study in Management; and the East Bay Agency for Children.

In 2021, Morris was inducted as a fellow in the National Academy of Human Resources, the highest honor granted in the HR profession. Morris is also a member of the ELC (Executive Leadership Council) an organization committed to increasing the number of global black executives in C-Suites, on corporate boards and in global enterprises.

A native of northern California, Morris earned a B.A. from the University of California-Davis and an MBA from Boston University. She resides in Oakland, Calif., with her husband and teenage daughter.

Tara Parker is talent management and diversity manager for ExxonMobil Corporation, a position she assumed in 2020.  She has responsibility for the design and implementation of a wide range of talent solutions and enterprise-wide talent initiatives, including building organizational capabilities and skills through training and development as well as growing workforce diversity through recruiting, internship and mentoring programs.

Ms. Parker joined Exxon U.S.A. in 1986 as a facilities engineer in Houston, Texas. With over a 35-year career with ExxonMobil, she has extensive experience in facilities and reservoir engineering, operations management, large project development and execution, and talent management.

Parker earned a bachelor’s degree in chemical engineering from Texas A&M University in 1985.

Parker serves on the Texas A&M University Chemical Engineering Advisory Council and is a member of the board of directors of Strake Jesuit College Preparatory school in Houston, Texas.

ExxonMobil offered Parker as an excellent candidate for consideration to serve on UNCF’s Board of Directors. She was elected to the board March 2 following the March 3 retirement of her ExxonMobil colleague Andrew Swiger, who served on the board for 13 years.

“A profound evolution in computing is opening a much larger opportunity with implications for every aspect of our business,” said CEO Bob Swan. “Saf has strong experience in strategy and international markets, a deep technical background, and he knows Intel well.”

Yeboah-Amankwah joined Intel from McKinsey & Co., where he was a senior partner and global head of the Transformation Practice for the Telecom, Media and Technology (TMT) practice, based in Washington, DC. He was also the global lead of Client Capabilities for the TMT practice. Previously he served as managing partner for South Africa and head of McKinsey’s TMT and Digital practice for Africa, among other roles.

Recent focal points for Yeboah-Amankwah have included the expansion of technology into Africa, noting a $300 billion potential as Africa’s digital economy expands, as well as supporting technology transformations of telecoms, financial instructions, agricultural operations, as well as mergers and acquisitions. His former profile at McKinsey listed his expertise mostly across finance, operations, mergers and acquisitions, with a focus on technology.

Yeboah-Amankwah received both his bachelor’s and master’s degrees in electrical engineering and computer science from the Massachusetts Institute of Technology.

He is a former UNCF board member.

UNCF (United Negro College Fund) is the nation’s largest and most effective minority education organization. To serve youth, the community and the nation, UNCF supports students’ education and development through scholarships and other programs, supports and strengthens its 37 member colleges and universities, and advocates for the importance of minority education and college readiness. UNCF institutions and other historically Black colleges and universities are highly effective, awarding nearly 20% of African American baccalaureate degrees. UNCF administers more than 400 programs, including scholarship, internship and fellowship, mentoring, summer enrichment, and curriculum and faculty development programs. Today, UNCF supports more than 60,000 students at over 1,100 colleges and universities across the country. Its logo features the UNCF torch of leadership in education and its widely recognized trademark, ‟A mind is a terrible thing to waste.”® Learn more at UNCF.org or for continuous updates and news, follow UNCF on Twitter at @UNCF.