UNCF and its 37 historically Black colleges and universities (HBCUs) members were saddened to hear of the passing of Jonathan Bush, a devoted supporter of UNCF. He was a savvy American businessman, a Civil Rights advocate and major supporter, and longtime partner to the organization. UNCF benefited greatly from its 22-year relationship, as he served as a member of the Board of Directors and as a national fundraising director, dedicating time and personal funds to our cause. 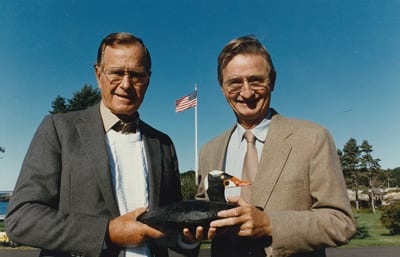 Prior to joining the Board, Bush served from 1983 to 1985 as the UNCF National Special Gifts Chairman, leading a capital fundraising campaign that helped UNCF raise funds to support our mission. Bush joined the UNCF Board of Directors in March 1985. During his tenure, he also served as chair of the executive committee and as a member the audit committee, the budget and finance committee, the investment committee and the nominating committee. He was elected board chairman in 1992 and served in that role until 1994. Upon retiring from the board in 2005, he was elected a Director Emeritus.

“The Bush family has had a long tradition of support for our organization, and Jonathan Bush was no exception,” said Dr. Michael L. Lomax, president and CEO of UNCF. “He was known for his big heart and strong will, and we certainly will miss his major support and talents. He made a mark on UNCF for 22 years that will not and cannot be forgotten. We thank his family on behalf of the many students and HBCUs who benefitted from his hard work over the years, as he joined with us to make a difference in the lives of those who needed it most. Mr. Bush truly understood that ‘A mind is a terrible thing to waste,’® and his significant fundraising efforts helped UNCF move the needle ever closer to being ‘a wonderful thing to invest in.’”

About UNCF
UNCF (United Negro College Fund) is the nation’s largest and most effective minority education organization. To serve youth, the community and the nation, UNCF supports students’ education and development through scholarships and other programs, supports and strengthens its 37 member colleges and universities, and advocates for the importance of minority education and college readiness. UNCF institutions and other historically Black colleges and universities are highly effective, awarding nearly 20% of African American baccalaureate degrees. UNCF administers more than 400 programs, including scholarship, internship and fellowship, mentoring, summer enrichment, and curriculum and faculty development programs. Today, UNCF supports more than 60,000 students at over 1,100 colleges and universities across the country. Its logo features the UNCF torch of leadership in