Special event will be livestreamed

The fireside chat will address Mr. Paul’s work spreading awareness of and securing equity for HBCUs and Black businesses. The discussion will include Atlanta University Center (AUC) students and will be livestreamed on UNCF’s Facebook page. Because of Mr. Paul’s commitment to the HBCU community, students will have the opportunity to ask questions and share insights from their experiences. The general audience will also have the opportunity to participate in the Q&A session with Mr. Paul. 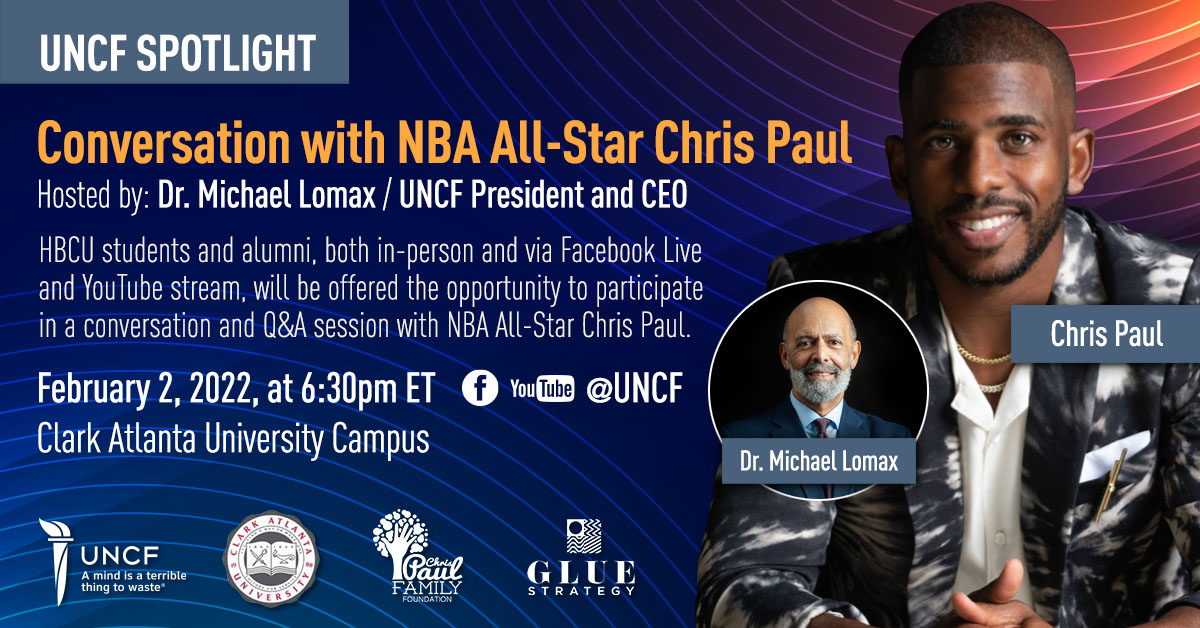 “UNCF is thrilled to host this fireside chat with Chris Paul, who uplifts HBCUs through classes, scholarships and activism to highlight the historical and cultural importance of the institutions, current students, and their alumni,” said Lodriguez V. Murray, senior vice president at UNCF. “This event, which will be anchored by our president and CEO Dr. Michael L. Lomax, is the beginning of a long-term partnership between UNCF and Chris Paul.”

The 11-time NBA All-Star winner partnered with Harvard Business School to bring its Entertainment, Media and Sports program to North Carolina A&T University and other HBCUs, creating the Special Topics in Management course to develop a career pipeline for students.

Paul, a Winston-Salem, NC, native, raised awareness through his HBCU Sneaker Tour and launched voting initiatives to encourage students to vote in the 2020 election. He executive produced the ESPN+ documentary, “Why Not Us: North Carolina Central Basketball.” Paul partnered with Sour Patch Kids to create the Mischief for Change Scholarship, a college scholarship fund with a $1 million commitment over the next five years for HBCU students.

A champion of HBCUs, Paul is renowned for his fashion statements, garnering increased attention for HBCUs, whether on the way to his games or on nationally televised commercials with his sponsors.

Paul is currently a student at Winston-Salem State University (WSSU), where he is pursuing a bachelor’s degree in communications and is a point guard with the Phoenix Suns. He attended Wake Forest University in Winston-Salem, NC, before being drafted into the NBA in 2005. Chris comes from a family of fervent HBCU supporters. Both parents attended WSSU, and his brother played basketball at Hampton University.

For information about the fireside chat event and how to view online, visit UNCF Facebook.

UNCF (United Negro College Fund) is the nation’s largest and most effective minority education organization. To serve youth, the community and the nation, UNCF supports students’ education and development through scholarships and other programs, supports and strengthens its 37 member colleges and universities, and advocates for the importance of minority education and college readiness. UNCF institutions and other historically Black colleges and universities are highly effective, awarding nearly 20% of African American baccalaureate degrees. UNCF administers more than 400 programs, including scholarship, internship and fellowship, mentoring, summer enrichment, and curriculum and faculty development programs. Today, UNCF supports more than 60,000 students at over 1,100 colleges and universities across the country. Its logo features the UNCF torch of leadership in education and its widely recognized trademark, ‟A mind is a terrible thing to waste.”® Learn more at UNCF.org or for continuous updates and news, follow UNCF on Twitter at @UNCF.