UNCF continued to celebrate its 75th anniversary on April 25 by giving away 37 scholarships, worth $2,500 each, to Washington, DC-area students who will be attending historically Black colleges and universities in the fall.

The scholarship news was a surprise to students, who convened at the UNCF headquarters for a College Readiness Open House. 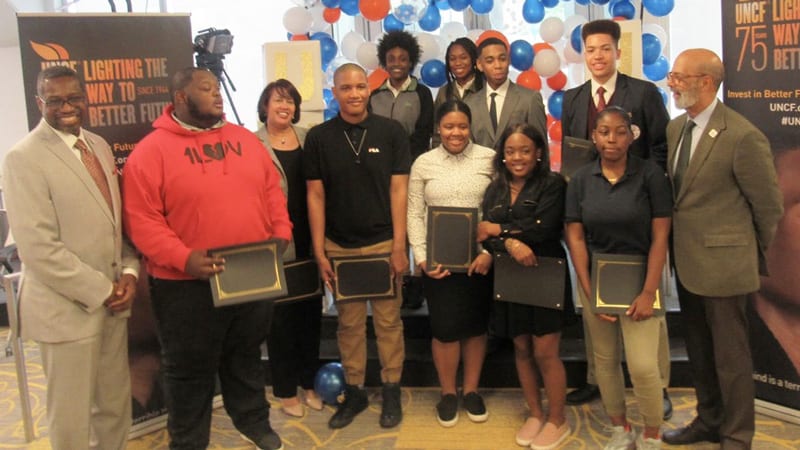 “This is a day of celebration for us,” said Larry A. Griffith, senior vice president of Programs and Student Services at UNCF. “In our more than seven decades UNCF has raised more than $4.8 billion and helped more than 450,000 students not just attend college, but to thrive, graduate and become leaders in their professions, in their communities and in the nation.”

Griffith said they achieved this goal of supporting 37 HBCUs, by awarding over 10,000 scholarships totaling more than $100 million each year and being a leading advocate for minority education.

Kamaya Haskins, 17, a senior at Largo High School in Maryland, who will be attending Voorhees College in South Carolina, couldn’t contain her joy and her smile radiated as she spoke.

“This is surprising,” Haskins. “I didn’t know they give out free money like this.”

Haskins knew early on that she wanted to attend college saying, “I got motivated by an uncle before he passed away and my best friend motivated me.”

Brandy Heard, Haskins’ mom, was moved to tears by the moment.

“It’s iconic because I did not think it was going to happen,” Heard said, referring to the scholarship and her daughter being able to afford college. “College is expensive and you start looking at the numbers that they put in front of you and you start looking at how you are going to do this semester to semester. And whether you had a nest egg or you work everyday, you are still not quite prepared as you think.”

“You don’t want your kids to miss out. This means everything for my kid to be able to go to school.”

Sidnee Salter, 17, a senior at Benjamin Banneker High School, is using the scholarship to help her attend her dream school Spelman College in Atlanta, GA.

“I’ve been wanting to go to Spelman since elementary school,” Salter said. “I visited there before and I liked the idea of sisterhood and empowerment. In society there are a lot of setbacks for African American women, so I like the idea of working together and pushing us to become better women.”

Omar Salter, who was on hand to watch his daughter receive her scholarship, said, “It’s a proud moment. I watched my daughter work from kindergarten and keep a straight A GPA and just grind very hard.”

The father also admitted that, “it’s also a very sad moment because now she’s not a baby anymore. She is a young lady, highly educated, ready to move into her own womanhood into the world.”

UNCF is the nation’s largest minority education organization, dedicated to serving youth, the community and the nation, UNCF supports students’ education and development through scholarships and other programs, strengthens its 37 member colleges and universities and advocates for the importance of minority education and college readiness. UNCF institutions and other historically black colleges and universities are highly effective, awarding nearly 20 percent of African American baccalaureate degrees.