Equity has been a huge buzzword in the field of education this year. Education advocates and politicians alike have called for an increase in educational equity, but what does the term really mean? Equity is not equality. Equity creates equality by prioritizing resources to students who need them the most.

For example, think of a typical track meet. There are five runners, each in their own lane. Each runner must run one lap around the track. The first runner to complete the lap, wins the race. Now let’s use this analogy to inform our understanding of equity.

Equality would mean that every runner would start the race at the exact same spot in their lane. However, the track is oval-shaped. If each runner began at the same spot, each runner’s distance to the finish line would be different. The runner in the innermost lane would run a shorter distance than the runner in the outermost lane. Sure, they would both start in the same spot (EQUAL), but the runners in the innermost lanes would have an advantage—in distance—than their counterparts in the outermost lanes.

This is precisely why track meets do not operate this way. Since the track is oval-shaped, each runner begins the race in their own lane, at different, equal distance, spots along the track; ensuring that each runner, runs the exact same distance needed to complete the race.

Now, think of our current public education system in this same context. Students—regardless of race, geography, household makeup—start on the same marker on the track. Some students, like the runner in the outermost lane, have to run harder and faster to get to the finish line. The barrier here is distance. In the real world, barriers include low-income, resource deprived neighborhoods, disabilities that require additional expertise, culturally negligent curriculum, outdated technology, inexperienced teachers or access to critical supportive services.

Meanwhile, the runner in the innermost lane has it a lot easier. They don’t have to run as fast or as hard to get to the finish line because of their initial position in the race. The barriers here are fewer in number. In terms of education, these innermost runners attend schools in affluent neighborhoods with a surplus of resources. These students have the advantage of local tax-based funding formulas, parent lead fundraising efforts and/or private funding, and state-of-the-art technology. 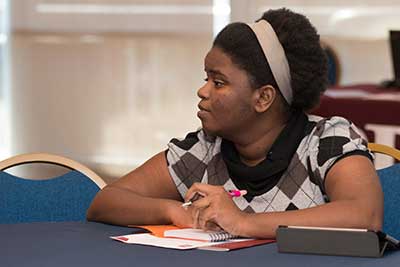 Our education system should also support students by allocating the most resources to students who are most in need, just as track athletes arrange themselves for fairer competition. The national education law, the Every Student Succeeds Act (ESSA) targets dollars to the highest poverty schools and districts. Under No Child Left Behind, schools could lose funding if they failed to meet statewide standards. But under ESSA, states cannot reduce funding by more than 10% from year to year despite school performance. ESSA also attempts to ensure that low-income students are not disproportionally taught by ineffective, inexperienced, and/or out-of-field teachers. ESSA requires that state and district report cards include the percentage of inexperienced teachers, principals, and other school leaders as well as teachers with emergency credentials, and teachers teaching subjects out of their range of expertise. ESSA also seeks to relieve some teacher angst surrounding evaluation systems by ending the requirement for state teacher evaluation systems to focus significantly on student test scores.

ESSA gives power back to the states to control education policy. Now, members of the community must hold their school leaders and elected officials accountable to implement system-wide and school-specific measures that ensure equity in our schools.

What we need is education reform that promotes fairness. Fairness equals equity. As Debby Irving in her book Waking Up White: And Finding Myself in the Story of Race states, “Equality means giving all students the exact same thing to meet the same expectations. Equity means holding people of differing needs to a single expectation and giving them what they need to achieve it.” In other words, the playing fields need to be leveled. It’s critical that our public educational system undertakes reform—changes so that each student is given what they need to succeed.

Furthermore, UNCF’s 2017 community resource, Lift Every Voice and Lead Toolkit: A Community Leader’s Advocacy Resource for K-12 Education, offers step-by-step analysis of African American Education and highlights organizations that have effectively engaged in education efforts at a local level to support efforts in improving the quality of education for all students.

This article was originally published Jan. 8, 2019, on Black Press USA