Johnson spoke at the awards ceremony, held Feb. 13. “It is my duty as a future educator to fight these injustices with tools of change—the youth. Instilling equality into my students’ minds makes each one of them an advocate for the betterment of our society,” said Johnson. 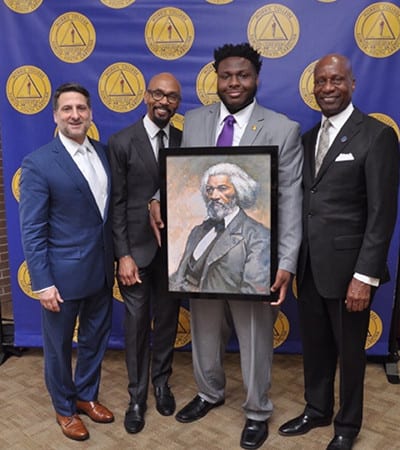 The Frederick Douglass Bicentennial Scholarship is funded by UNCF supporter Tony Signore, whose knowledge, respect and deep admiration for Douglass was instilled in him more than 35 years ago by the Jesuits at Fordham University. To honor one of the most important African American figures in our country’s history, the Signore Family designed and funded the program to recognize this historic leader, providing scholarship support to outstanding young women and men attending HBCUs. The program will be administered and managed by UNCF through academic year 2038-39.

The program awards $20,000 in scholarships each year to students enrolled in four-year HBCUs
Learn about the man who helped change our country