When going to college, just getting through the classes, learning and making the grades to be successful and earn your diploma is often daunting enough. However, with the cost of college rising steeply, some of America’s most promising students are now dealing with more than the usual college stresses of getting a degree. Many students on campuses across the country are facing basic needs like not having enough to eat or a place to live while they take classes.

According to the 2018 Still Hungry and Homeless in College Report, produced by researchers at Temple University and the Wisconsin HOPE Lab: 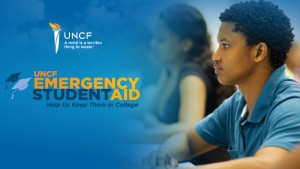 Your donations to UNCF’s Emergency Student Aid program can help UNCF-member HBCU students handle an emergency that can mean the difference between staying in school and dropping out.

What are “basic insecurities?”

The researchers reported that basic needs insecurities are common among both low-income students and moderate- to middle-income students. Moreover, the hidden costs of college, often not covered by institutions meeting “full need,” are key contributors to these challenges.

These students are not “lazy.” They often work full- or part-time jobs while enrolled, and they probably receive some type of financial aid for their school costs. Some of the students come from foster care and age out of assistance before they graduate. (More than 60% of former foster youth who completed the research survey were food insecure and housing insecure, and almost 1 in 4 had experienced homelessness in the last year.)

36% of university students were housing insecure in 2017

Some may have left home because of situations that made them feel unwelcome or unsafe. “Even with these challenges, our study finds that students experiencing basic needs insecurity exhibit similar levels of commitment to college as their peers who are not basic needs insecure, spending as much time in school and studying. There is not much evidence to suggest that they are irresponsible,” said the HOPE Lab researchers.

The common bond between homeless students was “not knowing where you were going to sleep, even for one night.”

What are schools doing?

Many schools across the country are attempting to address these insecurities. According to The Student Government Resource Center and The College and University Food Bank Alliance, more than 200 colleges and universities have established on-campus food and toiletry pantries to serve students, and the number is growing.

Phasing Up to New Possibilities program celebrates ten years
The program, which launched under the administration of former JCSU president Ronald L. Carter, was designed to assist aged-out foster students during their time on campus. Today, the program also assists students who are homeless or facing homelessness.

Some College Students Facing Homelessness, Hunger Around the Holidays
More than 30 homeless students and former foster youth are served by the university’s Students That Are Rising or S.T.A.R. Program.

How can you help? 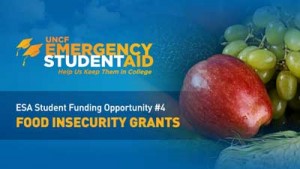 UNCF is working to help the students it supports with unexpected financial hurdles. UNCF’s newly-expanded Emergency Student Aid (ESA) program helps HBCU students with a myriad of funding emergencies, including food insecurity grants, in the form of credits to their school accounts, to underwrite dining hall meal plans for a specified amount of time or meals as determined by the institution. 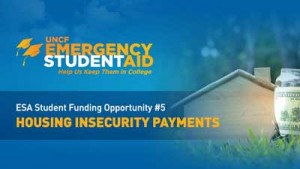 Your donations to UNCF’s Emergency Student Aid program can help these and other UNCF-member HBCU students handle an emergency that can mean the difference between staying in school and dropping out.

For low-income families—like those of the 92% of UNCF students who qualify for financial aid—the money needed to handle an emergency can mean the difference between staying in school and dropping out.