Your Voice Counts: The Power of Supporting HBCUs

In case we ever forget the power of donating to UNCF and our HBCUs, #standwithbennett will serve as a reminder. 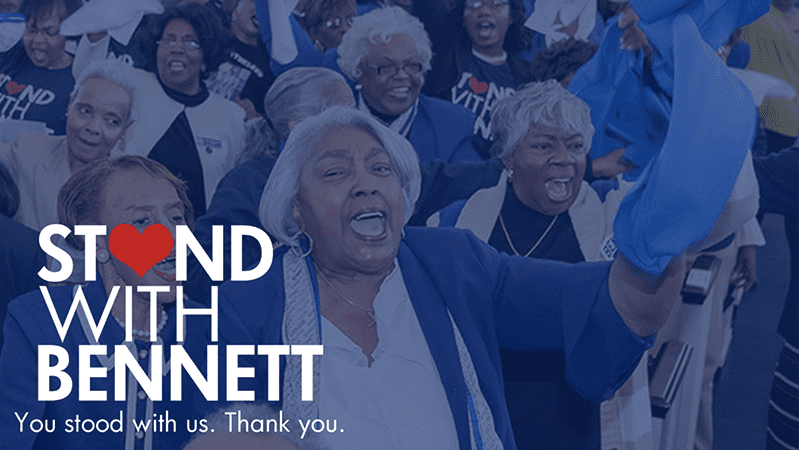 When Bennett College, a UNCF-member HBCU for women in North Carolina, announced in late 2018 that it was at risk for losing its SACS (Southern Association of Colleges and Schools) accreditation due to a $5 million shortfall in financial resources, it was a shock for all that had supported the venerated institution. Bennett was hardly lacking in supporters, however, and they rallied around the cause. Thanks to hundreds of alumni and other patrons who contributed to the #standwithbennett campaign, the college far exceeded its fundraising goal. Bennett soon announced they had raised $9.2 million to restore financial stability and maintain accreditation.

However, despite that victory, Bennett is not unique among HBCUs for facing financial struggles. And, as evidenced by the #standwithbennett campaign, the generous contributions of individuals and corporations are important—if not vital—to the life of an HBCU.

First of all, donating to UNCF and the schools it supports is crucial to the success of HBCUs and the students who attend them. Often, it relieves a financial burden that otherwise would have prevented a student from attending and succeeding in college. Largely due to financial struggles, black college students have the highest dropout rate of any ethnic or racial group. Often, they are forced to borrow large sums of money while balancing school with full-time work and family responsibilities.

This is why a UNCF scholarship is so important. UNCF scholarship recipients have a 70% six-year graduation rate, which is significantly higher than the 41% rate for all African American college students nationwide. Xavier University of Louisiana alumna Shavondria Jackson serves as a prime example of a UNCF scholarship’s impact. She overcame financial struggles at their most extreme, facing homelessness before a UNCF scholarship made it possible for her to attend Xavier, one of our member HBCUs. Shavondria graduated as a Fulbright Scholar and attended the UNCF New Orleans’ 2016 Mayor’s Masked Ball as a guest of honor, where she had a chance to give her personal testimony about the life-changing difference a scholarship can make.

Less intuitive, perhaps, is the positive impact that supporting HBCUs has on our nation’s communities at large. First of all, HBCUs are incredibly beneficial to the economy. HBCUs generate $14.8 billion in national economic impact each year, while producing approximately 134,100 jobs for their local and regional economies altogether. Every dollar spent by an HBCU and its students generates $1.44 in initial and subsequent spending for its local and regional economies. Most HBCUs are located in the Southeast and near areas with relatively low levels of economic well-being—where generating economic activity is especially important.

Additionally, HBCUs have proven to develop community-minded individuals who enter the workforce as better thinkers and learners. For example, Bridgette Florestal, who was orphaned at age 7 and raised by her grandmother, faced financial challenges throughout her entire childhood. She was a high-achiever in high school, graduating 14th in a class of 500, yet only one of the 150 scholarships she applied for came through—UNCF offered her a full scholarship to any of our member institutions. She chose Xavier. Once she graduated, Bridgette went on to medical school in Cuba where she learned both medicine and Spanish before returning to the U.S. to become a licensed physician.

You Can Change a Life.

To support HBCUs, look no further than UNCF. As the nation’s largest private scholarship provider to students of color and most effective advocate for HBCUs, UNCF awards more than $100 million in scholarships to more than 10,000 students at more than 1,100 schools each year. In just over 75 years, we’ve raised more than $5 billion to help more than half a million students earn college degrees. Donovan Burman, II, a first-generation college grad, exemplifies how a UNCF scholarship can help students defy the odds and find success. At least three generations back, no one in Donovan’s family had a college degree or, in many cases, even a high school diploma. At UNCF’s 2014 Orlando Mayor’s Luncheon, Dr. Michael L. Lomax announced that Donovan had been chosen to receive a $20,000 scholarship, which he used to enter UNCF-member HBCU Morehouse College in Atlanta. Attending the Orlando Mayor’s Luncheon four years later as a college grad, Donovan said that the UNCF scholarship had made his education possible and that he would be forever grateful.

Shavondria, Bridgette and Donovan can attest to why supporting UNCF means so much—UNCF’s work enables life-changing experiences at HBCUs and colleges and universities across America. With your donations and support, we look forward to telling more success stories like theirs by giving as many students as possible the audacity to lead.