Today, UNCF delivered its annual “State of the HBCU” Address, while announcing its Congressional Historically Black College and University (HBCU) Honor Roll, which highlights the positive impact of individual federal lawmakers on HBCUs. Because of their legacies and continued powerful combined impact, HBCUs serve a vital purpose in American academia and the United States economy. The State of the HBCU Address serves as a way to provide an update on what Congress has done to improve HBCUs, according the UNCF’s policy proposals, and share how Congress can continue to support HBCUs moving forward.

UNCF President and CEO Dr. Michael L. Lomax delivered the organization’s second “State of the HBCU” Address, thanking federal policymakers for making a permanent, annual $85 million investment in science, technology, engineering and mathematics education at HBCUs through the recently passed FUTURE Act. However, he noted that investment only begins to close the gap between what’s available and what’s needed to ensure all students who want a good college degree can get one.

“It’s my hope that a year from now when we meet again, we will have taken a giant stride to end the HBCU paradox and secure the transformational support that HBCUs have longed deserved and long gone without. On one hand, we know that HBCUs are among the few institutions in America that enjoy consistent bipartisan support. The gamut of American society hails HBCUs and the role they have played in the history of our nation. But despite all of that bipartisan support, HBCUs have always been woefully underfunded throughout their nearly two centuries of history. And in 2020, we are still badly underfunded despite the very real victories we won in Congress last year,” Lomax said.

In addition to the passage of the FUTURE Act, UNCF spearheaded efforts to increase annual funding for HBCUs via multiple programs approved by Congress. UNCF also secured a deferment of federal loan payments made by institutions through the Department of Educations’ HBCU Capital Financing Program.

Highlighting the support of more than 300 Members of Congress this year, UNCF also unveiled its HBCU Congressional Honor Roll. The honor roll recognizes Members of Congress who supported HBCUs by doing things such as authoring legislation, writing congressional letters, making speeches, joining the bipartisan HBCU Caucus and more. These Members served as champions and strong advocates for HBCUs during 2019. 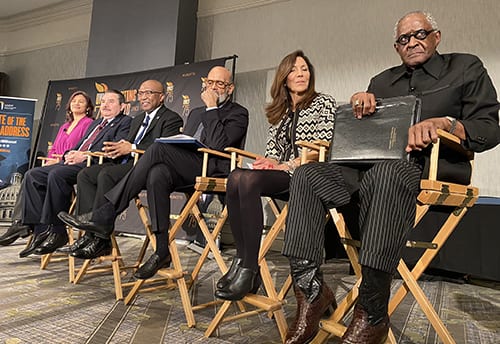 “This honor roll shows the depth of support HBCUs enjoy in Washington,” said UNCF’s Senior Vice President of Public Policy and Government Affairs Lodriguez Murray. “Our goal is simple: secure more support from all Members of Congress, adding to our recent successes—over $195 million in additional federal support for our institutions in the last three years and increased aid and support for low-income students. The needs of HBCUs and the students they serve are urgent. One reason UNCF exists to give those institutions and students a seat at the table when Congress divvies up the resources.”

Click here to access the full transcript of the State of the HBCU Address or visit UNCF.org/HBCUHonorRoll to view the UNCF Honor Roll. In addition, to learn more about UNCF’s public policy and government affairs efforts, click here.