Today, UNCF—on the heels of delivering over $100 million in additional federal funding to historically black colleges and universities (HBCUs)—held an inaugural “State of the HBCU Address” hosted by Bakari Sellers. This address set the agenda for federal lawmakers in the 116th Congress and highlighted the progress and accomplishments of HBCUs over the past year. Because of their legacies and continued powerful combined impact, HBCUs serve a vital purpose in American higher education and the United States economy. Congress, by law, has a continued responsibility to help fuel HBCUs and ensure they have the ability to serve their students and communities as they have for decades.

During the event, UNCF also spotlighted a new Congressional Honor Roll, which celebrates the impact of individual lawmakers. The honor roll recognizes members of Congress who supported HBCUs and their students by more than just voting, but by writing letters, making speeches, joining the bipartisan HBCU Caucus and more. These members served as true champions and strong advocates for HBCUs during the 115th Congress. 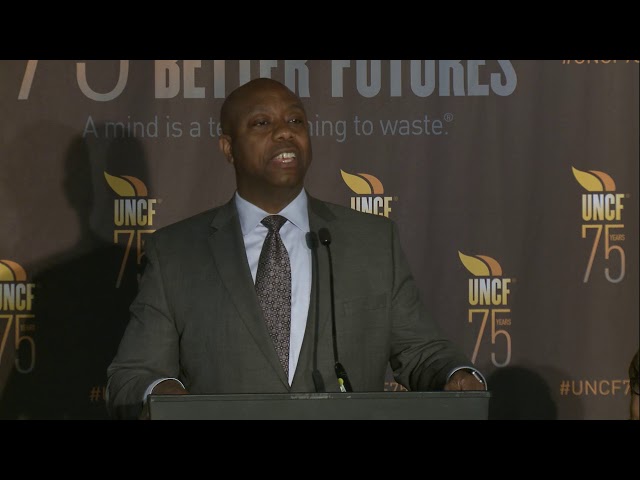 Prior to releasing the honor roll, UNCF President and CEO Dr. Michael L. Lomax delivered the first-ever “State of the HBCU Address,” calling on federal policymakers to make a substantial investment in HBCU infrastructure and innovation by significantly increasing and extending federal “Strengthening HBCUs” institutional aid; creating a $1 billion capital improvement plan for the institutions; and more than doubling the federal Pell Grant to ensure the most underserved students graduate with less debt. Additionally, Lomax called on the U.S. Department of Education to evaluate regional accreditors and their treatment of HBCUs.

“HBCUs are impactful institutions that are ALWAYS punching above their weight. Further, our institutions have consistently had to prove their mettle through resiliency and resourcefulness,” said Lomax. “We want our institutions to be vibrant, vital and strong. We want our partners, federal and otherwise, to invest at a level that is not simply about surviving—but thriving. Among the many contributions that HBCUs have made to this country, HBCUs are the engines that help power and deliver much-needed economic and workforce diversity. By that standard alone, our institutions are worth the federal investment we are asking for today.”

“This honor roll shows that higher education is a bipartisan issue and supporting HBCUs is as well,” said Lodriguez Murray, vice president of public policy and government affairs for UNCF. “Our goal is simple: work with all members of Congress to build on what we did last year—over $100 million in additional federal support for our institutions and increased aid and support for low-income students. During a time when college is increasingly more unaffordable and student debt is growing, HBCUs continue to represent a tremendous value and opportunity for many students and families.”