UNCF in the News 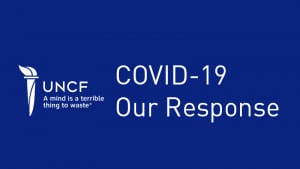 COVID-19: Tips for Students at Home During the Crisis

UNCF President and CEO, Michael L. Lomax, sat down with the “KIPP On Learning” podcast to discuss the uptick in donations as well as the significance of HBCUs.

Visit UNCF.org/Events to see upcoming UNCF events across the nation

For low-income, first-generation students of color, the American Dream is fading because education is not attainable, not accessible and certainly not affordable. >> Read More

The Atlantic: How to Launch the Next Great Era of Black Prosperity

Even today, in this time of racial awakening, many white Americans continue to ask the same demeaning question about historically Black colleges and universities that they did a decade ago and in the decade before that: With the end of Jim Crow and the integration of college campuses, does the country still really need HBCUs? >> Read More

Lomax Speaks on HBCUs and Urgency of Black Higher Education

Statement From Dr. Lomax on Murder of George Floyd and Renewed Anti-Black Violence (06/07/20)

Dr. Lomax speaks about the importance and relevance of HBCUs and the 75th anniversary of UNCF and the organization’s plans for the future. >> Listen here

Michael Lomax, president of UNCF, called for Congress to scrutinize the decision making of regional accreditors, whom he accused of dealing unfairly with struggling historically black colleges. “Just as black students in schools across this nation have been targets of and subject to punishments harsher than their nonblack peers, I would argue that historically black colleges and universities are receiving disparate and inequitable punishments and sanctions from regional accreditors,” Lomax said. >> Read More

Dr. Lomax delivers the keynote address at UNCF-member institution Paine College commencement ceremony, May 6, 2018; a thought-provoking message, “The Fight for Better Futures and the Important Role of Historically Black Colleges and Universities.” The message was delivered across the country through keynote addresses at the University of Michigan, Paine College and the Metropolitan Atlanta Alumni Association of Phi Beta Kappa and Civil Center for Human Rights lecture series. >> Click to view

New York Times: Black Colleges in the Age of Trump (1/16/18)
The Trump administration’s missteps have helped to put HBCUs in the national spotlight—revealing a national lack of understanding of these schools’ history, exposing the difficult position that H.B.C.U. administrators find themselves in, and highlighting the moral leadership exhibited by HBCU students. Read the op-ed from Stanley Nelson, Emmy and Peabody award-winning director and producer of the feature-length documentary “Tell Them We Are Rising: The Story of Black Colleges and Universities.” >> Read More

(5/18/20)
In virtual commencement, Obama called on graduates to be ‘warriors for justice’

“These aren’t normal times,” the former president said in addressing graduates facing the most unstable job market since the Great Depression.

The latest version of the FUTURE Act, a bill intended to renew $255 million in annual federal funding for minority serving institutions for two years, passed in the U.S. Senate last week – and passed in the U.S. House of Representatives yesterday afternoon with a 319 to 96 vote, followed by final unanimous approval in the Senate that evening. The amended bill passed the senate unanimously yesterday evening and now is headed to the White House and awaits the signature of President Trump.

Six-figure parent loans: When college dreams for students mean nightmarish debt for family
While Aaron Greene was packing to head back to Clark Atlanta University for his junior year, he stumbled upon a college bill at his mother’s house in Stone Mountain, Georgia. The number was so large that he figured it had to be a phone number. “I know my mother is not paying this much money for school,” he said. “We don’t have that.” >> Read More

The Journal of Blacks in Higher Education (7/1/19)

HBCUs Exceed Expectations When it Comes to Black Enrollment and Graduation Rates
When broken down by state, the UNCF report demonstrates the impressive “multiplier effect” that HBCUs have on African Americans. >> Read More

UNCF released a report Tuesday that concludes historically black colleges and universities (HBCUs) educates and graduates a higher percentage of African American students in Georgia and everywhere else they operate. >> Read More

Historically black colleges and universities, located primarily in southeastern states, are playing a role in the emerging economy of the region. UNCF has issued a report about the economic impact of HBCUs on African Americans in their respective states. The report says that despite being small and under-resourced, the colleges and universities spur an impressive amount of economic activity locally, both through the income generated by graduates who live locally, as well as the employment of local residents. >> Listen here

In its first State of the HBCU Address, UNCF is calling for more congressional action to bolster historically black colleges and universities (HBCUs) financially and bring transparency to accreditation groups that have taken “unpredictable, desperate and harsh” action against African American institutions of higher learning. On Tuesday, UNCF, to commemorate its 75th anniversary, issued its first Congressional Honor Roll of legislators who have helped HBCUs in their communities and states over the years. It outlined a multi-pronged effort to strengthen these schools. >> Read More