UNCF and Speaker Pelosi honored the late congressman in March for a lifetime of championing underserved individuals, including HBCU students in his district

UNCF mourns the loss of a champion of Civil Rights, from the 1960s to the Black Lives Matter Movement of 2020, the conscience of the United States Congress—Representative John Lewis. One of the planks of his life of advocacy for equality and equity was his championing of Historically Black Colleges and Universities (HBCUs).

Lewis was more than just the congressman from Georgia who represented the interests of Morehouse College, Spelman College, Clark Atlanta University, Interdenominational Theological Center and Morehouse School of Medicine in the U.S. House of Representatives. He was an embodiment of what an HBCU education offers: the opportunity to speak out to make the country better; from his years as a Fisk University student (and leader of the Student Nonviolent Coordinating Committee) to the present, but Lewis also spoke truth to power while wielding power in the Congress as the Chief Deputy Whip of the House. 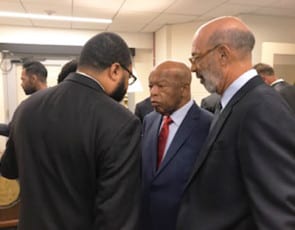 “John Lewis was my Atlanta City Councilman, then my Congressman, and always my friend,” said Dr. Michael L. Lomax, president and CEO of UNCF. “In Congress, he was essential to every single step forward for our HBCUs and our students. He was a fierce advocate for the marginalized and powerless, including first generation and low income college students.  He empathized with them and knew their inherent value and power because he was once one of them at Fisk University. John Lewis represents the best of who we can be as a human being. Period.”

“In March of this year, UNCF gave its highest award to Congressman Lewis,” said Lodriguez Murray, senior vice president for public policy and government affairs for UNCF. “Speaker Nancy Pelosi presented Congressman Lewis with the UNCF Frederick D. Patterson Award. It was one of those rare moments when we at UNCF were humbled to honor him. The man who said he grew up in a shotgun house rose to vote and command the attention of the nation in the ‘People’s House,’ and we are grateful for his votes in our favor and the advocacy for the disenfranchised that no statement itself can contain.”