UNCF: A Big American Idea that Became a Reality

When Dr. Frederick D. Patterson, Mary McLeod Bethune, John D. Rockefeller and other legendary American education, business and social leaders came together in 1944 in New York City to incorporate the United Negro College Fund in April 1944, their vision was to fuel historically Black colleges and universities (HBCUs) across the United States far into the future—all the while not knowing how long the mission would last or how many lives it would touch.

Originally, UNCF supported 27 colleges. The goal was simple—make it easier for the smaller, underfunded HBCUs to continue to educate a largely Black constituency that had few to no other college options because African American contributions to American society were sorely needed—and at all levels. And UNCF was a success from the very beginning. The first annual campaign in 1944 raised $765,000—an amount three times more than what was raised by the individual colleges through separate fundraising campaigns in the previous year.

In their wildest dreams, UNCF’s founders could not have foreseen the success of this fundamentally big American idea that became a reality. In 2019, UNCF—having stood the test of time—turned 75. Since those heady early days, many things have changed. From 27 member institutions to 37. From a few thousand students annually attending its HBCUs to 55,000. Add to that, an additional 5,000-plus students who get scholarships who aren’t attending UNCF-member HBCUs, and UNCF annually supports more than 60,000 students in total.

To commemorate the year, UNCF launched a series of 75th anniversary events all year long, raising awareness about how it has worked tirelessly to enable as many students to get to and through college as possible. UNCF conducted 63 events, raising an unprecedented $14 million in unrestricted revenue. That amounts to more than 8,000 students earning their degrees during the most recent academic year.

Remarkable, one might say. But it doesn’t end there. 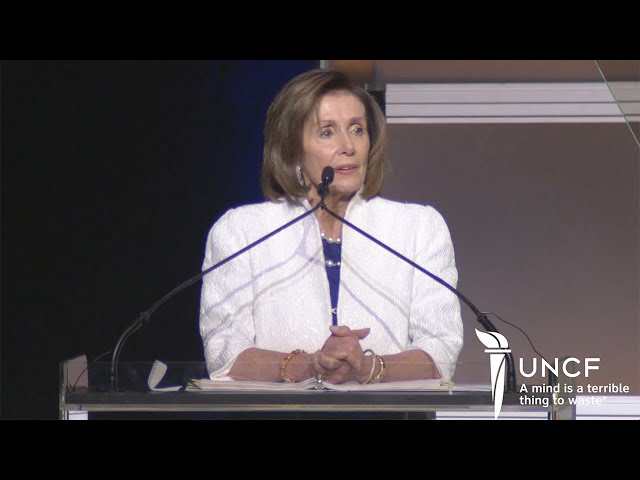 In its 75 years, UNCF has raised over $5 billion in donations—gifts—from supporters, both large and small, across the spectrum of the United States. And through those billions of gifted dollars, it has helped more than half a million students earn their college degrees. Quite an accomplishment—and quite a reason to come together to celebrate.

So, on March 5, 2020, UNCF officially wrapped up its 75th anniversary celebration efforts during its National “A Mind Is…” Gala, in Washington, DC, at the Wardman Park Marriott Hotel, recognizing all that has been and launching a vision of what is yet to come.

Among the many tributes and honorees supporting UNCF over its decades of work were the Top Ladies of Distinction, Procter and Gamble and Lilly Endowment, Inc.

Also marking the event were two significant tributes to national civil rights leaders and federal lawmakers, U.S. Rep. John Lewis (D-GA) and U.S. Rep. James Clyburn (D-SC). Speaker of the House of Representatives Nancy Pelosi attended the event, showing her respect for both UNCF and the honorees. “It is a great honor to join the friends and leaders of UNCF to recognize two of our nation’s most extraordinary civil rights champions, Whip James Clyburn and the Conscience of the Congress, Congressman John Lewis, in this year that marks 55 years since the march from Selma,” said Speaker Pelosi. “As we observe this milestone and celebrate 76 years of UNCF’s outstanding success, we must all recommit to the fight to expanding opportunities and advancing justice for communities of color and for all Americans, and to building the more perfect union that generations of courageous Americans have sacrificed to build.”

To punctuate 75 years and the national commemoration, UNCF President and CEO Dr. Michael Lomax added his thoughts to the evening. “As the story goes, the great African American poet Langston Hughes—another HBCU graduate—was working as a busboy here at the Wardman Park Hotel when he was discovered in 1925 by poet Vachel Lindsay.

“So you might say that it is poetic justice that 95 years later, an organization dedicated to educating African American poets—and teachers and scientists and businesspeople—would have raised more than $5 billion in 75 years, would have helped graduate more than 500,000 students, and would be awarding more than 10,000 scholarships a year worth $100 million.

“And would be a powerful and laser-focused advocate for its 37 private HBCUs, and one of the nation’s most effective advocates for all HBCUs.

“Or that taken in aggregate, HBCUs would become an economic engine generating almost $15 billion in annual economic impact, and $130 billion in lifetime earnings for each HBCU graduating class?

“I think Langston Hughes would have been proud. And we hope that all of you are too.”

So, with more than 75 years of remarkable history, accomplishments and impact under its belt, UNCF now leans into the future, knowing that it remains the vital, necessary higher education dynamo that began all those years ago as a big American idea—an idea that has stuck with us because it works, and it does what it says it will do: empower needy, deserving students to get and through college successfully.