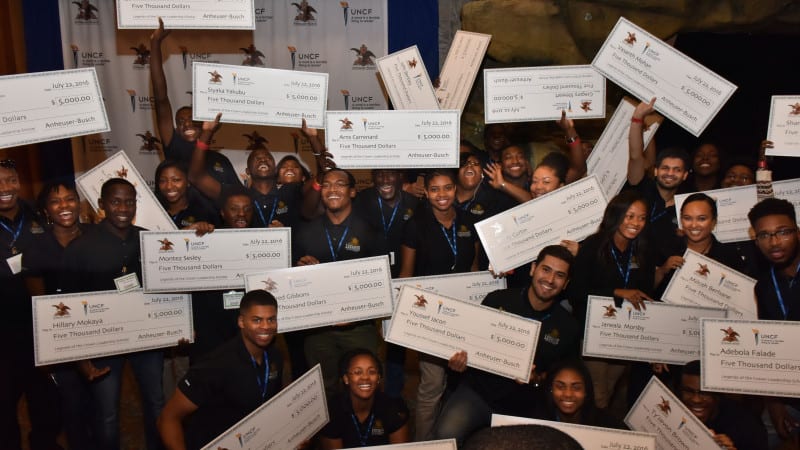 Creativity and inventive tracks to keep the train moving forward are hallmarks of how UNCF has managed to make an indelible mark across its years of empowering as many deserving students as possible to earn a college degree. Since 1977, Anheuser-Busch and the Anheuser-Busch Foundation (ABF) have helped fuel several projects and business activities that have become legendary parts of the UNCF business model over the years.

With passionate desire and fervor of vision, Anheuser-Busch and its foundation have gotten behind UNCF’s efforts, making investing in better futures a priority. Through scholarships, unrestricted donations, event sponsorships and in-kind donations, the industry’s leading brewery best known for brands like Budweiser, Bud Light, Michelob ULTRA and Stella Artois, has helped untold thousands of students of color get to and through college. Over the 42-year partnership, donations to UNCF by Anheuser-Busch and its foundation total more than $4.7 million and counting.

The storied history of the two organizations working together began in the late ’70s with a generous donation to help students attend historically black colleges and universities (HBCUs). Since then, the support of UNCF by Anheuser-Busch and its foundation has taken off substantially:

When Anheuser-Busch signed Lou Rawls as a national spokesperson, the corporation asked which charity he wanted Anheuser-Busch to support as part of his contract. Rawls told them, UNCF. While the company had donated generously to UNCF in previous years, the financial investment that came from its support of UNCF’s telethon, “The Lou Rawls Parade of Stars,”TM went on to raise more than $200 million for UNCF from 1980-2006.

The Anheuser-Busch Foundation began a named scholarship program focusing on college juniors and seniors with a financial need. Donations under the program have now reached more than $1.58 million in scholarships, which have been awarded to nearly 350 students to date. Under the 2019-2020 program, 38 talented students received scholarships valued at $4,000 each.

In 2013, Anheuser-Busch donated “The Great Kings and Queens of Africa” art collection to UNCF, a group of paintings valued at more than $1 million, that had been commissioned by Anheuser-Busch in 1975-2000. UNCF distributed pieces from the collection to six UNCF-member colleges and universities: Morehouse, Clark Atlanta, Dillard, Fisk, Xavier and Benedict.

“The donation by Anheuser-Busch of ‘The Great Kings and Queens of Africa’ paintings to UNCF-member HBCUs is an important contribution to the artistic and cultural education that has always been a hallmark of the HBCU experience,” said Michael L. Lomax, Ph.D., president and CEO, UNCF. “These works of art help students appreciate both the paintings’ artistry and the stories they tell, while the Anheuser-Busch scholarships continue to keep the promise of the paintings alive by helping outstanding up-and-coming student leaders overcome the financial obstacles that so many of our HBCU students face.”

Anheuser-Busch has been a frequent donor to UNCF’s efforts over the 42 years of its partnership.

“We are grateful to the Foundation for its steadfast, generous and continued support of our mission,” Lomax explained. “The gifts by Anheuser-Busch and its foundation enable us to serve our institutions and our students not only financially, but through new and inventive experiences which have been mainstays of UNCF’s efforts for many years. We look forward to continuing to do great things with this great partner.”