Dr. Lomax on the ‘State of the HBCU’: “Our Aspiration Is To Lead, Not To Follow” 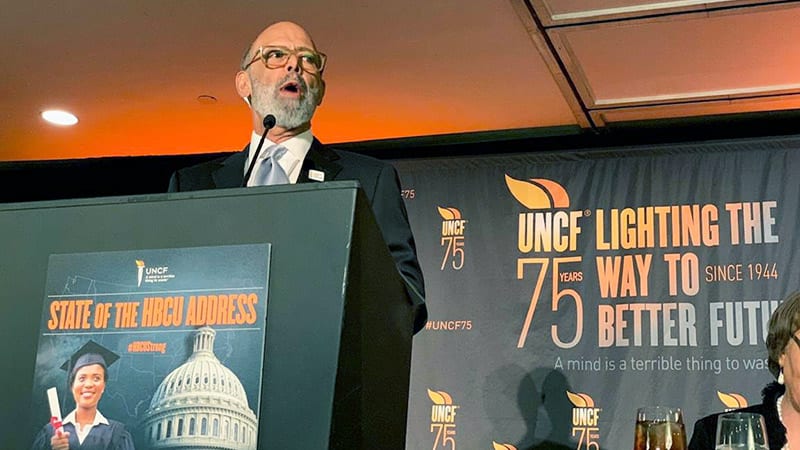 Dr. Michael Lomax, UNCF President and CEO, delivers the first-ever “State of the HBCU” address on Capitol Hill to members of Congress, member presidents and other supporters of historically Black colleges and universities.

So the crowd that gathered in the a room near the United States Capitol in March 2019 to hear UNCF president and CEO Dr. Michael L. Lomax report on the “State of the HBCU” knew they would get a candid assessment of where HBCUs stood as UNCF began celebrating its 75th anniversary, and where the organization was going in the months and years ahead.

Dr. Lomax did not disappoint. “During nearly 250 years of slavery, the enslaved were forbidden to learn to read and write,” he told the gathered audience of educators, policy makers and HBCU leaders, “while white institutions like Harvard were developing into elite colleges. Even after the first HBCUs were founded, they languished another century-and-a-half, during which they were under-resourced, undervalued and disparaged—subjected to a gap in resources compared to white institutions, a gap reflected in the Black-White wealth gap in the larger society today.”

But “despite obstacles and barriers, assaults and attacks, underinvestment and devaluation,” Lomax said, “the state of HBCUs is resilient.” HBCUs have persisted, producing educational results far beyond what would be predicted based on their size and funding. “HBCUs,” he explained, “represent just 3% of all colleges, but 10% of all Black college students, almost 20% of all Black college graduates and 25% of all graduates in the crucial and highly valued STEM disciplines of science, technology, engineering and mathematics.”

And now, after 75 years of UNCF resilience and persistence, “Our aspiration is to lead, not to follow.” Citing what HBCUs contribute to local, state and national economies—including 50,000 college graduates every year and almost $15 billion in economic impact—he called on the federal government to invest in increased student aid for low-income students; increased funding for HBCU operations; $1 billion in HBCU infrastructure; and fairness in accreditation practices.

“Since our founding in 1944, UNCF has had two major constituent groups—our historically Black colleges and universities and our students,” he concluded. “We are more determined and more committed than ever, believing as we do, in the power of our cause and our shared belief that ‘a mind is a terrible thing to waste,’® but a wonderful thing to invest in.”

Following his address, major federal policy ideas have seen significant movement in Congress and beyond. Major presidential campaigns have embraced Dr. Lomax’s call to help underserved students by doubling the Pell Grant award for those who need it the most. And both the United States House and Senate have acted on top priority legislation for HBCUs—increasing necessary resources for our institutions and their students.