UNCF K-12 Advocacy, working to ensure A Seat at the Table

Nothing is more meaningful than the impact of these programs on the lives of the students.

“I do this for the 7th grader who computes math on a 3rd grade level. The 3rd grader that reads on a 1st level and the kindergarten student that enters the school system already at a deficit because their families lack the resources. ‘What good is it if Black and Brown boys/girls can now sit at the counter if they can’t read the menu.’ This was a quote that Dr. Fuller said at a BAEO conference that I attended as a UNCF Fellow alum, and it has stuck with me forever.” 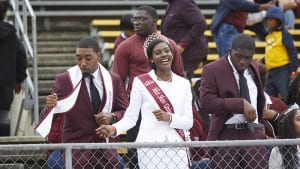 My Walton Fellowship experience gave the opportunity to look at educational equity from many different perspectives. It was my first time stepping into the classroom and is a large reason why I am still teaching. My Walton experience exposed me to what it means to be an intentional and effective educator and leader. I am thankful for my time at Walton and am currently teaching at the school that I was an undergraduate fellow at.

Getting students to and through college is the primary mission of UNCF. Often times, the focus is on the “through college,” as preparation for and access to college is often not the first thing that comes to mind when it comes to earning a degree. Increasingly UNCF has found it vital to ensure that students of color are prepared before they reach high school to succeed and “get to college.” As one of the leading voices in K-12 education reform, UNCF’s K-12 Advocacy department released a new report, A Seat at the Table: African American Youth’s Perceptions of K-12 Education©, that examines changes needed to improve K-12 education for African American students—to ensure they are college- and, eventually, career-ready.

The report, authored by the UNCF Frederick D. Patterson Research Institute, is the latest in a research report series that studies the current state of K-12 education. We’ve all heard the saying “If you’re not at the table, you’re on the menu”—suggesting that if you’re not represented during the decision-making process, you’re in a vulnerable position and are at great risk of being left out of critical decisions and long-term outcomes. Because little research includes minority youth voices about education reform, this study examines the perspectives of low-income African American youth from select cities throughout the nation. Key findings in A Seat at the Table include:

Parallel to the report’s release, the, K-12 Advocacy team also hosted an UNCF Education Summit. The event served as a face-to-face discussion point for the student perspective on education, a call to action on P-16 issues and a platform for engagement and exploration of the role of African American voices—specifically HBCUs—in education reform efforts. The summit brought together a distinct group of African American leaders, advocates and K-12 education reformers, including Jamar McNeeley of Inspire NOLA, Mendell Gringer of Campaign for School Equity, Erika Harrell, parent advocate, and Khalia Murray, current elementary classroom teacher—all with the mission to make the “getting to” part of the college journey all that much more possible.