#STANDWITHBENNETT and Deliver: Strength Through Numbers Saved Bennett College When it was Most Needed 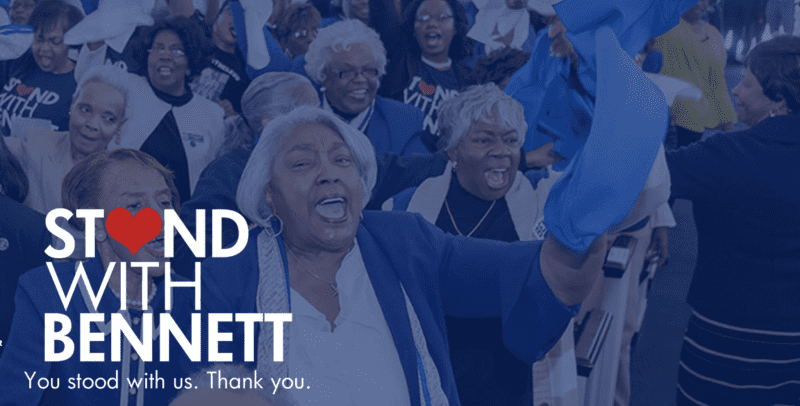 When then-Bennett College President Dr. Phyllis Dawkins visited UNCF in early 2018, she had no idea how strong an ally and advocate the organization truly was for its members HBCUs. She discovered that and more: UNCF gets into the trenches and helps when needed most.

During that meeting, Dawkins informed UNCF President and CEO Dr. Michael L. Lomax, Vice President of Research and Member Engagement Dr. Brian Bridges and Vice President of Public Policy and Government Affairs Lodriguez Murray that her institution faced a looming deadline—just about a year away—to fix a set of financial and accreditation issues to be solved or face possible closure.

Working with President Dawkins, UNCF’s leadership devised a plan to cure all she laid bare that day, starting with the financial piece which directly tied to the federal HBCU Capital Financing program. Years before her tenure, Bennett College accessed a loan from the U.S. Department of Education, and that loan was now causing financial stress for the institution.

Working as a team, UNCF and Bennett College contacted and worked with U.S. Secretary of Education Betsy DeVos and several members of Congress, including Rep. Ted Budd (R-NC) and Rep. Alma Adams (D-NC), to create a first-of-its-kind deferment authority to provide relief for the historic women’s college in North Carolina. That authority didn’t just benefit Bennett College; it impacted 12 other private HBCUs with a similar need.

With a loan deferment secured, UNCF then turned its attention to accreditation issues that, despite the North Carolina college’s best efforts, the HBCU couldn’t solve alone. Bennett had corrected all but one issue—fundraising—and asked for UNCF’s expertise and guidance. Thus, the #STANDWITHBENNETT campaign was born. In order to overcome its accreditation issue entirely, the college needed to prove that it had a solid cash reserve that was over $5 million.

The college had some success generating funds to boost its reserves, but the early February 2019 accreditation deadline drew near quickly. Thanks to UNCF’s nationwide assistance and large, visible platform, the college received more than $8 million in donations in a little over a month.

Aiding Bennett College wasn’t just a responsible thing to do, but more importantly, it was the right thing to do. HBCUs are an essential part of the American educational and economic infrastructure of the United States. So, preserving this member institution’s legacy wasn’t just important—it was vital. Vital to the community-at-large because of its $36 million in annual economic impact. Vital to the faculty and staff that worked tirelessly to enable future generations through education. And, vital to the young women of color who chose the storied institution for its transformative liberal arts programs in a nurturing environment.

So, despite the trials, Bennett College remains accredited and open for business, a testament to success. The impact of such a win cannot be understated: HBCUs matter. UNCF matters. And together, the united front stood and delivered on what UNCF’s promise is to all its member colleges and universities—combined strength through numbers makes us all stronger.