The Enduring Power of Partnership: AKA and UNCF 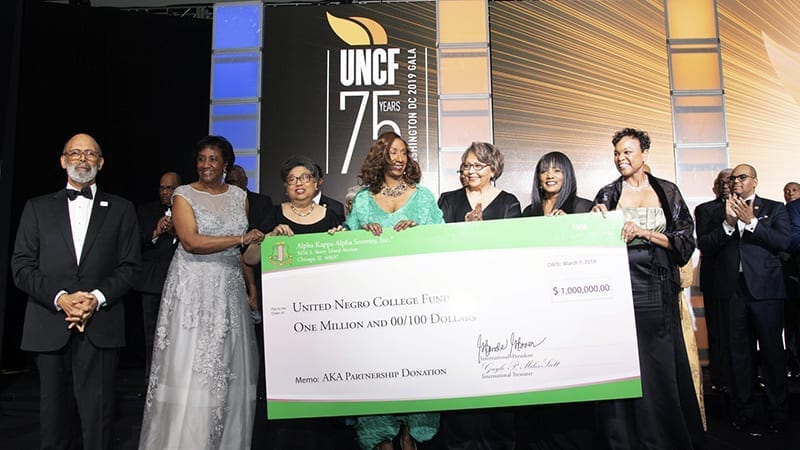 A POWERFUL INVESTMENT IN BETTER FUTURES®

For more than 40 years, the partnership of Alpha Kappa Alpha Sorority, Inc. (AKA), the nation’s first African American sorority, and UNCF, America’s first cooperative fundraising venture in higher education, has been a powerful sustaining force for historically Black colleges and universities (HBCUs). It is a partnership built on missions that are highly aligned in their dedication to ensuring the longevity and success of these vital academic institutions.

Throughout the fruitful partnership, AKA presidents have served on the UNCF Board of Directors which, today, is strengthened by Dr. Glenda Baskin Glover, AKA International President. Support for HBCUs is an AKA priority, and AKA and its members have invested in UNCF to date. According to Glover, “Alpha Kappa Alpha’s 111-year history is deeply interwoven into the history of HBCUs, and therefore it is imperative that we continue to invest in these treasured institutions.”

To commemorate their longstanding commitment at the start of UNCF’s 75th anniversary, AKA powerfully demonstrated its desire to invest in HBCUs. In partnership with the Educational Advancement Fund, it launched the AKA-HBCU Endowment Fund and pledged to distribute $10 million to 96 accredited institutions over four years. Thirteen of the 32 participating HBCUs are UNCF-member institutions. And during the national “A Mind Is…” Gala, responding to UNCF’s 75th anniversary call to action, AKA pledged $1 million to UNCF, presenting a $1 million check at the national event in Washington, DC. Later in 2019, AKA also raised $1 million to secure fiscal sustainability and success for all HBCUs during its one-day fundraising drive, AKA HBCU Impact Day.

The UNCF/AKA partnership reflects UNCF’s iconic motto, “A mind is a terrible thing to waste”® and AKA’s pledge “to become an indomitable force for good.” Together, UNCF and AKA are increasing investments in HBCUs, ensuring their long-term sustainability and capacity to continue to serve as economic and education engines that power America.