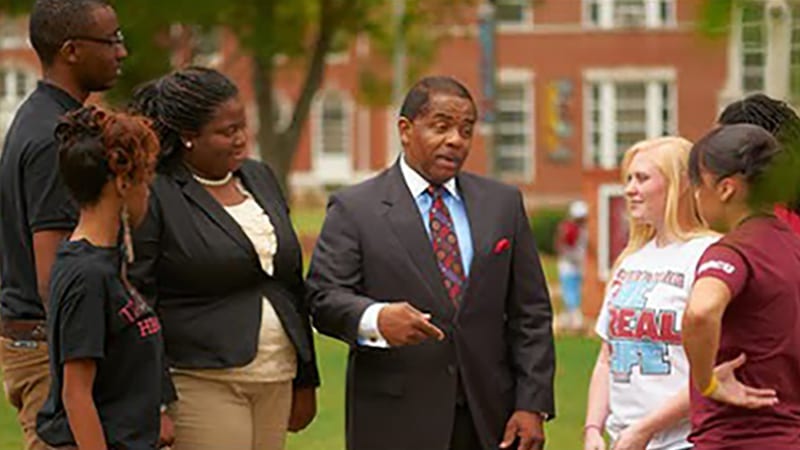 When you’re an HBCU president, you are often a multi-tasking, high-energy conductor who must tackle a myriad of challenges to deliver education, impact and change. As the Chair of the UNCF Members, Dr. Billy C. Hawkins is just such a transformational person. And as the 20th president of UNCF-member Talladega College, Hawkins has taken on the mountain—Talladega—and moved it back to a place of preeminence and laudability.

Hawkins has worked in education for 36 years, beginning his successful career as a teacher in the Lansing, MI, Public Schools System. His passion for teaching led him to the field of higher education where he served in various administrative roles at Mississippi Valley State, Saint Paul’s College, Ferris State University and State University of New York at Morrisville College.

On Jan. 1, 2008, Hawkins started his term at Talladega College, rejuvenating the venerable institution piece by piece. Since his arrival, student enrollment has increased more than 70%, the entire physical plant has been upgraded and one classroom building has been renovated, restored and reopened. Successively, three dormitories were refurbished, a new police station was built, a $4.5 million rehabilitation/restoration of Foster Hall Dormitory began, finances have been restructured and stabilized, and new academic programs have been added. He successfully guided the institution through a 10-year SACS accreditation. And, under his term, Talladega has been reinstated to the National Athletic intercollegiate Association (NAIA), winning three national championships in men’s and women’s basketball.

During 2008, Dr. Hawkins implemented rigorous plans for renovation and growth at Talladega. As a result of his vision, enrollment doubled from just over 300 students to 601 students in a single semester, athletic programs were reinstated for the first time in 10 years, and major campus beautification projects were undertaken. Talladega has enjoyed record-high enrollment in both the 2018-2019 and 2019-2020 academic years. The college currently has 1,230 students and is listed among the Princeton Review’s best colleges in the Southeast and U.S. News and World Report’s most innovative colleges. The college continues to expand its mission and reach, recently launching its first-ever graduate program—an online master of science degree in computer information systems.

While he’s juggernauting ahead as the Talladega College President and the Chair of the UNCF Members, Hawkins continues to juggle many other priorities quite successfully. He was appointed to serve on the Historically Black Colleges and Universities Capital Financing Advisory Board by former U.S. Secretary of Education Rod Page. He is also a current member of the NAIA President’s Council.

Hawkins is the recipient of numerous honors and awards. Most recently in 2011, he was a recipient of the “Ultimate 50 Who’s Who of Birmingham” Award. He received the Omega Century Award of Excellence in Education from the National Omega Psi Phi Fraternity, Inc. He also received the National Associate of Colored Women’s Clubs, Inc., Achievement Award and the Texas Alliance of Black School Educators Leadership Award. Hawkins was inducted into the Kent City Schools Hall of Fame in both 2004 and in 2007. And, Hawkins is a proud member of Omega Psi Phi Fraternity, Inc.

As an energetic mover and shaker, Hawkins uses his years of experience to strengthen UNCF’s 37 member institutions as the new Chair of the Members. His leadership is making a difference for all of UNCF by helping to develop opportunities for all members in the areas of accreditation, financial management and institutional advancement. His experience and talents, much like the biblical figure of Moses, are helping to transform UNCF to ensure better futures for all.