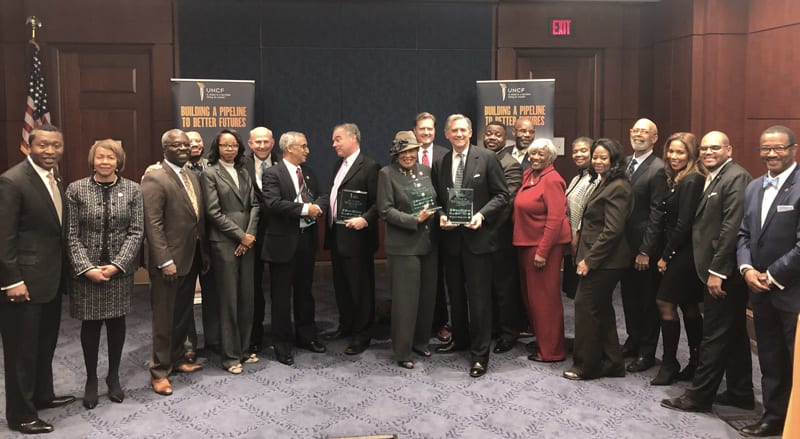 Finding support to keep a college degree affordable and available to as many deserving students as possible, yet still providing a quality education can often seem like a high-wire act to legislatures. Working across the aisle, as they say in the parlance of Capitol Hill, is important to get anything done, particularly when it comes to supporting the nation’s historically black colleges and universities (HBCUs). But, because of UNCF’s tenacity and persistence, the point was made that HBCUs need more to do more.

And, so in a single calendar year, 2018, thanks in large part to UNCF’s dedicated team of HBCU funding evangelists—its government affairs department—HBCUs across the United States received funding increases from Congress signed into law by the president of more than $100 million due to the late passage of fiscal year (FY) 2018 spending bills. FY2018 was funded in March of 2018, and FY2019 was funded in September 2018.

“We had to tell it like it is. Our HBCUs needed more funding. Period. And, though, we had little time to get this done because of the two funding cycles colliding, we were diligent and pressed our points with staffers and members of Congress on both sides,” said Lodriguez V. Murray, senior vice president, UNCF Public Policy and Government Affairs.

“Lodriguez and his team are our ‘ministers’ to Capitol Hill,” said Dr. Michael L. Lomax, UNCF’s president and CEO. “They bring the good news HBCU message the Hill desperately needs to hear about our colleges and universities.”

Pressing an advantage during the relatively short back-to-back funding cycles, UNCF met with U.S. Representatives, U.S Senators and their staffs to (1) prioritize the capital needs of HBCUs and (2) the need to better use federal funds to help low-income, first-generation college students finance their education, engaging both Republicans and Democrats in its efforts to win support for HBCUs and their students. Programs such as Title III—which directly impacts students in the science, technology, engineering and math (STEM) disciplines—the Pell Grant, federal work study program and the federal Supplemental Education Opportunity Grant received increases during 2018 that were greatly needed by many HBCU students.

“UNCF focused on building a bipartisan coalition and educating Congress on the value and needs of HBCUs, which led to a 15% increase in overall HBCU-related spending from FY2017,” Murray added. “With continued advocacy efforts focused on HBCUs and the students they serve instead of partisanship, UNCF is now poised to impact higher education in a way that will generate the future workforce and leaders the country needs sooner rather than later.”